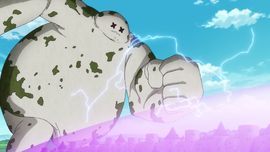 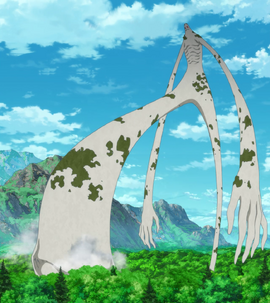 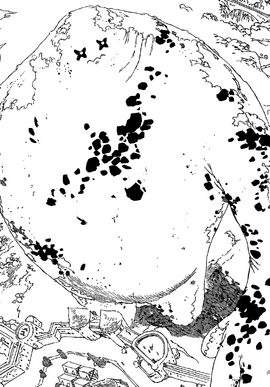 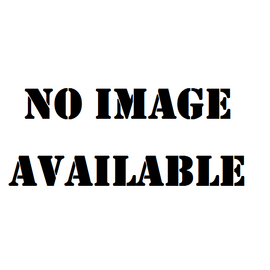 Great Beast Albion「アルビオン Arubion」 are giant golems created by the Demon Clan during the ancient war between the allied clans. They were reawakened after the seal on the Coffin of Eternal Darkness was broken.[1]

Albion are gigantic creatures the size of mountains. They appear to be formed from the earth by demonic magic and as a result, possess the black marks that are typical of the Demon Clan. While they are typically giant creatures, their shape can differ between each golem. The Albion that attacked Camelot was rotund with hulking limbs,[2] while the Albion that attacked the Fairy King's Forest was thin and gangling.[3]

The Albion were created 3,000 years ago by the Demon Clan as weapons to combat the allied clans.[4]

When the Ten Commandments are revived, they release two Albions in Britannia.

One of them attacks the kingdom of Camelot. The Albion tries to destroy Merlin's Perfect Cube that has been set by her to protect the whole of Camelot by punching it over and over but its attack does not do any damage. It shoots to a flame to the barrier, however, the Holy Knights succeed to neutralize the Albion's attack, but he is not sure that they will survive the second attack. As Arthur feared, the Albion shoots another flame. The Holy Knights desperately try to shield their king with their bodies, but the Albion attack is reflected by Meliodas' Full Counter. Following Meliodas, Arthur ordered the Holy Knights to climbed the Albion's arm. Arthur got trapped under Albion's hand, but Meliodas saves him quickly, breaking Liz's Sword in the end. After Meliodas gets his Sacred Treasure, Lostvayne, back from Merlin, he slices Albion's left arm easily in one move and finally defeats the Albion using his special technique Jitsuzō Bunshin.

The Other Albion attacks the Fairy King's Forest. When the fairies run scared, the Albion is confronted by King. However, none of the forms of Chastiefol is strong enough to hurt the Albion, who injuries King and slices the Sacred Tree. In the end, King releases the true form of Chastiefol and destroys the Albion with one hit.

Some Albions are part of the Demon Clan army that is faced by the Holy Knights during the Holy War. When Diane uses her Queen Embrace to ambush them, one of them manages to deliver a direct hit but Diane is unharmed grants to Heavy Metal and ends the Albion with one hit from Gideon. Finally, King uses Chastiefol's Tyrant Tempest to eliminate all the Albions. The rest of the Albions are destroyed by Sariel and Tarmiel's Omega Ark.

As a golem created by the Demon Clan, Albions are extremely powerful magical creatures. They appear to possess a wide range of abilities that differ according to their form. [5]

The fat Albion that appeared in Camelot specializes in destruction, being capable of breathing huge fireballs from its mouth and using its immense strength to throw devastating punches. It was also shown to learn from its opponent, adapting to Meliodas' magic and strength by sprouting five cannons from its face.[6]

Meanwhile, the slim Albion that appeared in the Fairy King's Forest specialized in slashing and could fire energy beams from its mouth to counter King's Sacred Treasure.[7] It could also use its gangling limbs as whips that were powerful enough to cut the tops off mountains.[8]

The power level of all Albions is:

Retrieved from "https://nanatsu-no-taizai.fandom.com/wiki/Albion?oldid=145674"
Community content is available under CC-BY-SA unless otherwise noted.