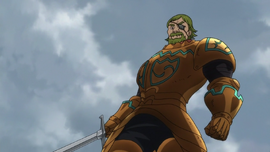 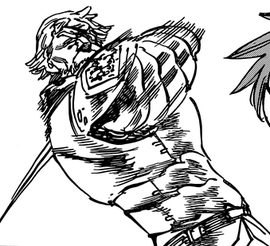 Aldrich「アルドリッチ Arudoricchi」 is the knight who disguised himself as a merchant and murdered Helbram's fairy friends for their wings. After being killed by Helbram, the vengeful fairy took his appearance and went on to kill every human he came across for five hundred years.

Aldrich is a fairly built strong man despite his old age. He has an eye-patch that covers his left eye and a scruffy face with a beard.

Aldrich is a sly and cunning individual who deceives the group of fairies to cruelly rip their wings off and sell them for money. He bears no compassion even when murdering the fairies with adolescent appearances.

Aldrich and his accomplices encountered a group of fairies and befriended them. After gaining their trust, they claimed that they will offer them free goods, however, the old warrior immediately took advantage of the distracted fairies and captured them. The humans started to ruthlessly rip off the wings of Helbram's friends, planning to sell them for a large sum of money. Aldrich's actions were immediately noticed by the ruler of the Fairy Realm, King, who took off to save the fairies. By the time King arrived, he could not find any of them still alive, when Aldrich caught him off-guard and slashed the Fairy King from behind. Helbram saw his friend being knocked off the cliff, and thinking King was dead, he immediately killed Aldrich to take revenge.

Several hundred years later, Helbram continues to use the old warrior's physical appearance, joining the Holy Knights of Liones serving under Hendrickson and battling the Seven Deadly Sins in his human form until the fight with King compelled him to discard the disguise.

Aldrich was a fairly experienced fighter in his own right, and appears be a veteran swordsman possibly a Holy Knight. He wields a broadsword and was able to defeat King by catching him off-guard from behind.

Retrieved from "https://nanatsu-no-taizai.fandom.com/wiki/Aldrich?oldid=130719"
Community content is available under CC-BY-SA unless otherwise noted.