For the character in the original oneshot, see Alioni (Oneshot) 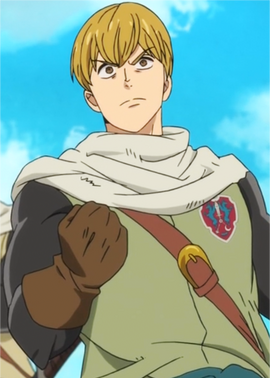 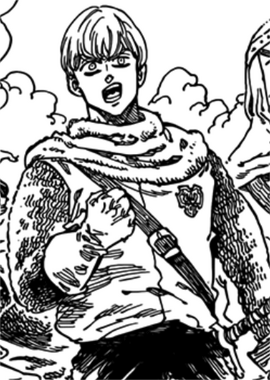 Beard of the Mountain Cat

Alioni「アリオーニ」 is a member of the group of knights, Beard of the Mountain Cat, which was garrisoned at the base of the mountain in Kaynes Village and claimed to serve under a Holy Knight. He was first seen beside his fellow knights trying to capture the enigmatic and infamous Rust Knight who had appeared at the mysterious bar, the Boar Hat.[1]

Alioni is a young man with light brown hair and dark brown eyes who wears the standard uniform of a knight and has short hair.

Not much is known about Alioni, except that he has a short temper, which is seen when he quickly gets angry by Meliodas' attempts to mock and fool him.[2]

Ten years ago, Alioni was in the kingdom's capital where he and the elderly Holy Knight discovers bodies of dead Holy Knights in the aftermath of the Seven Deadly Sins' supposed betrayal and displays fear of the legendary knights' fearsome power.

Upon getting a notice from the villagers about the Rust Knight being in Boar Hat and possibly being a member of the Seven Deadly Sins, Alioni, together with his fellow knights, demanded that the owner of the establishment come out while bringing the Rust Knight, intending to arrest the latter. When Meliodas did not do so immediately, Alioni assumed that he was afraid; however, much to the knight's surprise, the young man promptly came out. Alioni demanded that the Rust Knight come out as well, only for Hawk to pretend as him. Insulted and angry for being mocked, the knight lifted Meliodas by his collar. Just then, he was notified by one of his subordinates that a woman had escaped from the back door.[3]

Assuming her to be the infamous Rust Knight, he led the other knights to capture her, instructing them to not led their guard down, telling them that they only had to corner her till Twigo arrived and that the reputation of the knights of Beard of the Mountain Cat would increase if they captured a member of the Seven Deadly Sins. While the knights were chasing her in the woods, Hawk started to defeat them one by one by charging from behind and then quickly pushed Alioni from the cliff.[4] He was later saved by Meliodas, when Twigo cut a part of the cliff, which would have crushed him.[5]

Although he was seen wielding a sword[6], nothing is known as of yet about his skill with it, or if he has any other abilities.

Retrieved from "https://nanatsu-no-taizai.fandom.com/wiki/Alioni?oldid=146610"
Community content is available under CC-BY-SA unless otherwise noted.