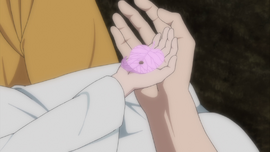 A species of flora, named Almoca, once grew among the huge and supernatural variety of flora in the Fairy King's Forest. The species' leaves are known to have the capability to store water within their fur-like surface.[1] An almoca seed was the sole remnant of the forest after its burning at the hands of a demon[2], the seed was afterwards planted by Ban.[3]

The almoca is first introduced when Ban, during his week-long stay in the Fairy King's Forest, excitedly discovers its leaves' capability of storing water.[1] Later, after the demon burns the whole forest, and Ban, in return, kills it, a dying Elaine presents an almoca leaf with the last seed of the forest to Ban, requesting him to plant it.[2]

The almoca, like all species that grew in the Fairy King's Forest, possessed supernatural abilities, one of them being that it could only be burned by a demon's purgatory fire; normal fire would not damage it at all.[4] It also has the ability to reproduce a new forest if planted.

Ban remembers being given the seed by Elaine

Retrieved from "https://nanatsu-no-taizai.fandom.com/wiki/Almoca_Seed?oldid=149604"
Community content is available under CC-BY-SA unless otherwise noted.