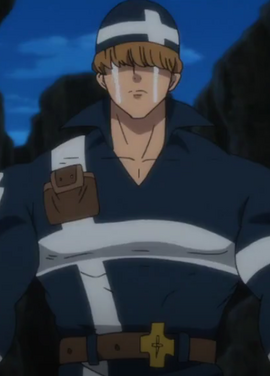 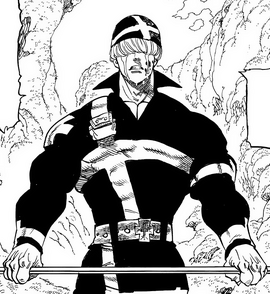 Arbus「アーバス Ābasu」 is a Priest of Destruction who joined the Great Fight Festival for unknown purposes.

Arbus is a tall, bulky man with short brown hair and a long fringe covering his eyes. He wears a blue attire with white crosses patterns in his chest, belt and hat.

When he was under Tarmiel's possession he is seen with a goddess symbol in his eyes and has six wings.

Little is known about his personality but it is shown about Arbus crying at everything he sees when he killed an Earth Crawler and cried at its response of dying by his hand.

After accepting the invitation to the Great Fight Festival in Vaizel, Arbus entered the labyrinth where he later defeated an Earth Crawler and killed the knights too as well, and begins to cry, praying to the goddesses.

Arbus manages to reach the end of the labyrinth where Drole and Gloxinia recieves all the participants. When the tag teams are formed, Arbus is paired with Estaro and both are set to fight against Hendrickson and Griamore.

Arbus is taken as hostage by Drole along with everyone besides Meliodas, and later teleported to Liones by Gilfrost.

Arbus reappears, with his body under possession of Tarmiel, one of the Four Archangels, to help the Holy Knights fight against the demons.[1]

It is revealed by Tarmiel, that a few days after the Great Fight Festival, Arbus died fighting a lesser demon. At that moment, the Archangel manifested himself through his staff and asked Arbus' soul to allow him to use his body to fight the demons to which Arbus agreed.

Arbus appears to be a formidable fighter in his own right, strong enough to kill an Earth Crawler and also the knights whom he flattened them into the ground brutally with several precise strikes by his staff. Arbus' equipment consists of a staff that he is always carrying with him. A member of the Four Archangels of the Goddess Clan, Tarmiel, rests inside.

Retrieved from "https://nanatsu-no-taizai.fandom.com/wiki/Arbus?oldid=148039"
Community content is available under CC-BY-SA unless otherwise noted.