Start a Wiki
watch 01:48
Who is Arthur Pendragon?
Do you like this video? 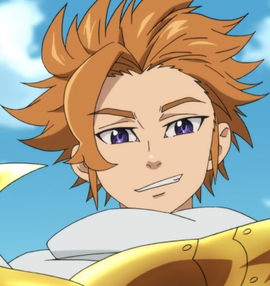 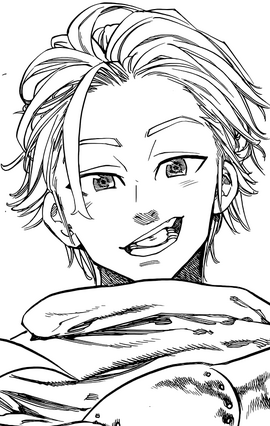 Arthur Pendragon「アーサー・ペンドラゴン」 is the current king and ruler of Camelot and holder of the legendary sword, Excalibur.

Arthur's helmet
Arthur dons a set of full-body gold-colored steel armor with a unique helmet accentuated by three horns, two triple integrals, and a cape.[2] He has a very youthful appearance, with messy orange hair and a long cowlick that falls over the right side of his face.[3] Arthur also appears to be relatively short in height.

Arthur is a polite, young man who is still adjusting to his role as king. He takes his responsibilities very seriously, but usually undertakes them with a smile and has a very warm, and happy-go-lucky demeanor. Despite his outward appearance, it would be wrong to characterize him as immature or oblivious as shown when he was a child, he was fully aware that his older, adoptive brother hated and is even tried to kill him, but hopes one day they could become friends.[4]

Before becoming a king, Arthur was a simple child who was adopted by a man who happened to be a Holy Knight and had an adopted older brother named Kay. Kay harbored a hatred for the young boy. Once, while they were children, Kay took Arthur's sword and offered to give it back to him if he crushed an apple with a stick whilst blindfolded and in the middle of a gorge on one of several platforms. Arthur completed this challenge with ease. Kay was furious at Arthur's skill and tossed the sword at him which lead to Arthur falling down unfazed while Kay smiled. However, Arthur was saved by a strange Holy Knight who was shocked and amazed at how Arthur managed to be brave and fearless whilst falling to his doom. He was also impressed as to how Arthur forgave his brother, even telling him he should be a king instead of a Holy Knight like their father. Arthur was shocked until it was revealed that he was Bartra Liones, the 11th king of Liones, as he wondered if he was never going to be a Holy Knight as the king of Liones and his two escorts, Slader and Hugo, left for a meeting with King Uther Pendragon.

During the Introduction arc, Arthur is rumored to have just became the new king of Camelot by the drinking patrons at Boar Hat in the small town of Bernia.[5] In Camelot, a giant sword fell from the sky to the Earth, where people believed that it was a holy sword sent from God. Every Holy Knight tried to pull it out, but they all failed until Arthur came and successfully pulled the sword, making him the new king of Camelot.[6]

At some point in time Arthur met Merlin, the Boar's Sin of Gluttony, who became his teacher and resolved to rescue King Bartra from the Holy Knights.

Arthur in the past carried a golden sword and was geared with golden metal armor.[7] Arthur appears to be a very capable combatant as he easily blocked Hendrickson's surprise attack and simultaneously dealt a counter strike, dealing a blow on the Great Holy Knight. Arthur's swordsmanship skill is far above that of an ordinary human, as Arthur was able to fight evenly with Hendrickson and had great speed. But Hendrickson knew that Arthur was holding back for reasons unknown.

Arthur appeared to already have a high degree of strength in his youth as shown by being able to pull the sword Excalibur from its stone with ease. While Arthur himself does not know the limits of his own power, it is said that holding and using the legendary sword Excalibur allows him to access its full potential.[8]

When wielding Excalibur, Arthur is empowered by the souls of all the master swordsmen who previously wielded the holy sword, and as a result he possesses full knowledge of different swordsmanship styles from the previous wielders of Excalibur and can use them with masterful ease. Arthur also gains a massive increase in speed and strength when wielding Excalibur, as shown when he was capable of fighting against Meliodas in his Assault Mode, Zeldris, Cusack and Chandler, even although none of them were using their full powers.[9]

He seems to also carry a type of immunity or resistance to Commandments as Zeldris was curious why his Piety did not effect Arthur.

He has been noted by Orlondi to lack a presence which explains his skill in sneaking up on demons and dispatching them without ever being caught.

Kay is Arthur's adoptive brother. Arthur appears to like Kay well enough and doesn't view him as a bad guy. Kay, on the other hand, seems to dislike Arthur and did not care if he died during their childhood.

Arthur and Merlin have a student and master relationship. It is unknown how they met but Arthur holds Merlin in high esteem and considers her an irreplaceable friend and valued teacher. They seem to be very close, with Merlin covering his eyes with her hand as Meliodas gropes Elizabeth and when Arthur is crying uncontrollably because he thought that Merlin had died and that he had failed to protect her.

Arthur and Meliodas appear to have a good relationship. Arthur seems to think very highly of Meliodas, seeing him as heroic and a skilled fighter during his battle against Hendrickson and Gilthunder. Arthur was so amazed at Meliodas skill and character that he offers him the rank of Great Holy Knight in Camelot which Meliodas accepts to Arthur's joy. Arthur was later disappointed when Meliodas said he will come to Camelot "when he feels like it" to help with Camelot's problems. Arthur's admiration continues to deepen as the story goes along. However, after discovering of Meliodas's betrayal, Arthur accepted the fact that Meliodas was the enemy. He stated that he would never forgive Meliodas for what he had done, and then tries to kill Meliodas.

Arthur and Nanashi seemed to have an odd friendship since they first met as combat partners at the start of the Great Fight Festival. Although his attempts to befriend the foreign swordsman were met with indifference, Arthur have somehow managed to convince him help defend Britannia from the Ten Commandments.

Retrieved from "https://nanatsu-no-taizai.fandom.com/wiki/Arthur_Pendragon?oldid=135604"
Community content is available under CC-BY-SA unless otherwise noted.