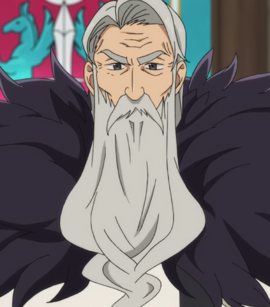 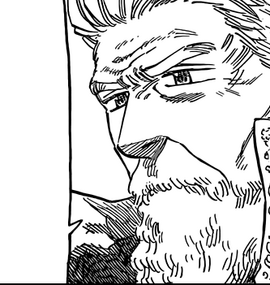 Bartra Liones「バルトラ・リオネス Barutora Rionesu」 is the eleventh king of the Kingdom of Liones. He is the foundation of the Seven Deadly Sins and the father of Margaret and Veronica, and the adoptive father of Elizabeth Liones. His inherent power is Vision, which allows him to see into the future.

Bartra is a fairly tall man with a long white hair and groomed beard. He adorns a typical king's cloak accessorized with fur on the shoulders and hemline. He also wears a pair of armlets and a few rings.

In the past, he wore full body armor with a unique helmet that has bull's horns and visor that of a Cyclops' eye alongside a cape.

Bartra is a caring, respectable father who strongly cares for his daughters. He was willing to risk his life and climb a tree, something which he had never done before, in order to rescue his daughter.[2] He is also a peace-loving person, having ordered the Holy Knights to lay down their arms, as an attempt to avoid the predicted and apparently inevitable, Holy War.[3] Like his daughter Elizabeth, he has faith in the Seven Deadly Sins, knighting them and granting them the valuable sacred treasures, despite their identities as wanted criminals. As a father, Bartra does not seem to approve of Meliodas' perverted antics on his daughter, Elizabeth, or Veronica's tomboy attitudes.

During his youth as prince of Liones, Bartra lived in the castle with his brother Denzel and his sister Nadja.

After hearing one of her brother's visions about a person in a cavern underneath the castle, Nadja went and explored herself, coming across Gowther who seemed to be waking up from a long sleep. Nadja excitedly told Bartra about Gowther when she returned to the castle. Despite being happy for his sister, Bartra was worried about her due to her heart condition. While Nadja was still visiting Gowther, he brought her to the castle when she fainted. Bartra convinced Gowther to disguise himself as a maid to go unnoticed. It worries Nadja because Bartra had inadvertendly gave Gowther a crossdressing habit which the future Seven Deadly Sins member persists in the present day. Over time, as Nadja and Gowther become closer, Bartra allows Gowther to remain in the castle and to stay with his sister since being with him made her happier than she had ever been.

When Gowther was accused of forcing Nadja into vile sexual acts that ended with her death, sentencing him to death as the sin of lust, Bartra cries for his sister's death. However, he prevents an angered Denzel for taking revenge on Gowther since he saw Nadja has died with a smile in her face.

Sixteen years ago, Bartra adopted Elizabeth, who was brought from Danafor to Liones by Meliodas after its destruction. As she knew that she is not his real daughter, Elizabeth often tried to get his attention, specifically by climbing a tree and putting herself into danger. Fearing for her safety, Bartra started climbing the tree to rescue her, even though he had never climbed a tree before. However, he couldn't climb it, fell down and was injured.[4] He was later healed by Elizabeth, who had unknowingly used her powers.

At some point of time, Bartra, who was leading a campaign against Barbarians, soon met an injured young boy being chased by savages and saved him after having his archers rain death upon the boy's pursuers. Bartra took him in, taught him everything what is to be human and named him "Slader", earning the young man's devotion and loyalty to King Liones.

On his way to the Kingdom of Camelot to meet with King Uther Pendragon, Bartra saved a little boy from falling off the cliff which was caused intentionally by Kay and had a good conversation with the future king of Camelot before heading off with Slader and Hugo, stating that they will meet again.

After receiving a premonition of his power Vision about seven knights who would be the protectors of the kingdom, Bartra shared this with Meliodas and Zaratras. Merlin then appeared in the castle revealing herself along with Meliodas as two of those seven individuals. Guided by Bartra's vision, Merlin was able to identify the other five members of the Seven Deadly Sins.

After the Seven Deadly Sins were officially formed with the successful recruitment, Bartra named them Holy Knights and gave each one his Sacred Treasures.

Nothing is known about his abilities or equipment as of yet. In the flashback and the past, Bartra wore full body armor with a unique helmet appearing as the bull's horn and Cyclops' eye and wields a sword. He also has a huge armored warhorse. With a power level of 530, he is far more powerful than an average Holy Knight at the power level of 300.

Considering how he risked his life to save his daughter from a tree without hesitation, and how his daughter cares about him[5], it can be assumed that they share a strong father-daughter relationship. It was then proved that Bartra indeed loved Elizabeth and embrace her when he found out she was alive and happy to hold her again.

Bartra frequently scolds Veronica whenever she acts like a tomboy and for playing swords with the boys. Although Denzel stated that Veronica was able to pull wool over her father's eyes.

As a father, Bartra deeply loves Margaret as much as he does towards Veronica and Elizabeth. When he learns Ludociel possessed Margaret, he demands the return of his daughter out of fear and concern after remembering Denzel was possessed by a Goddess Clan member and died.

Denzel is Bartra's younger brother. They care deeply for each other and he was saddened to hear Denzel was killed. He remembers how Denzel died after being possessed by a Goddess Clan member and demands Ludociel to leave Margaret's body.

Caroline was Bartra's wife and queen of Liones. Not much is known about their relationship but they loved each other and accepted to have Elizabeth adopted into their royal family. When Caroline was killed by monsters who attacked them during a formal tea party, Bartra mourned for her.

When Bartra first met Slader as a child, Bartra gladly took Slader under his wing and took him back to Liones to become a Holy Knight due to Slader's great power in spite of his young age. Bartra cares greatly for Slader, viewing him as a dear friend of his.

Not much is known about their relationships, but Bartra appears to trust him like the other Deadly Sins despite their crimes. He personally assigned Meliodas to guard Elizabeth. However, Bartra is obviously bothered and concerned whenever Meliodas sexually harassed his daughter, Elizabeth. Even trying to split the two up when they hugged and scolded Meliodas for using her as his waitress.

The reason Gowther wears girly clothes and acts girly is because of Bartra. Bartra made Gowther wear dresses to disguise him as a maid in order to be by Princess Nadja's side. He did not believe Gowther raped his sister to death because she died with a smile on her face.

Retrieved from "https://nanatsu-no-taizai.fandom.com/wiki/Bartra_Liones?oldid=154560"
Community content is available under CC-BY-SA unless otherwise noted.