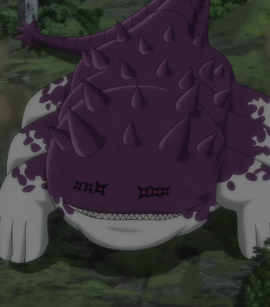 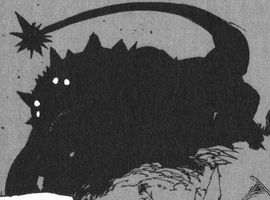 Baruja「バルージャ」 is a member of the Demon Clan and an acquaintance of Galand.[1]

Baruja is a extremely large beast-like Demon. He possess a large purple body with six stumpy legs, his back is covered in spikes and has a long tail that ends in a spiked sphere. Baruja has big mouth and six eyes.

Having becoming an Indura, Baruja lost his ability to reason. He is a monster moved only by instincts and rage, searching only for destruction.

During the Holy War, Baruja sacrificed six of his seven hearts, becoming the Indura of Retribution. Although he acquired a terrible power, he lost all his ability to reason.

During a battle in the Sky Temple, Baruja brought misfortune to the five races who could not cope with his power. However, all were saved by the Great Oshiro who allowed the Goddess Clan to seal Baruja in the Egg Rock along with the Six Knights of Black and several other demons. The Winged Sword, the weapon bestowed to seal the Demons, was passed on the Celestials, who keep it until the arrival of the Time of Ruin come, when the seal would break releasing Baruja and the other demons.[2]

After 3,000 years, when the seal of the Egg Rock fell apart, the Six Knights of Black were released from their imprisonment and started the ritual to release the Indura by offering the Celestials's souls. The ritual was disrupted by the Seven Deadly Sins, forcing Bellion to sacrifice his companions's souls and finally free Baruja from the seal.

Released, Baruja starts his rampage over the Sky Temple once more. The Seven Deadly Sins tries to stop his feet, while Solaad use the Winged Sword and his Ark to seal Baruja again. However, Bellion gives his soul to Baruja as well, giving him enough power to avoid being sealed. After reaching the plaza of the Sky Temple, Hawk Mama appears to confront Baruja. Baruja attacks with a powerful energy blast, but Hawk Mama absorbs it and attacks with a white light that leaves Baruja very wounded. Then, Solaad resummons the power of Ark by uniting the entire Celestial Clan and Elizabeth as well, giving the Winged Sword enough power to seal Baruja. The Seven Deadly Sins combines their techniques in a single and powerful attack that destroys Baruja once and for all.

Baruja was a demon that possessed seven hearts and a power level of at least 50,000, marking him as one of the strongest demons. Having invoked his Indura form, his current power would be far greater than what he possessed before his transformation. Merlin states that he possesses a greater power than the Ten Commandments.[3]

Not much is known about their relationship, but it's known that he was an acquaintance of Galand.

Retrieved from "https://nanatsu-no-taizai.fandom.com/wiki/Baruja?oldid=126321"
Community content is available under CC-BY-SA unless otherwise noted.