The Spirit Spear Basquias「霊槍バスキアス, Reisō Basukiasu」 is a legendary spear granted to Gloxinia, the first Fairy King to be chosen by the Sacred Tree.[1]

Basquias has ten forms, but is most commonly seen in the form of green octopus-like limbs wrapping around the user's body. It currently shows signs of black coloring at its tips, symbolizing the demonic corruption of the holy weapon of the Fairy Clan.

In its authentic form, it is a spear of immense size, as much as Chastiefol in its true form. This after the blade has a half circle.

Basquias is an immensely powerful weapon, possibly even more so than its counterpart, Chastiefol. Like Chastiefol, it has the qualities of the Sacred Tree and is shown to possess a number of unique forms: 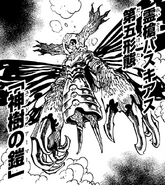 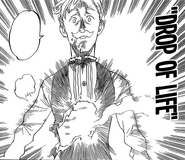 Basquias' Drop of Life healing Escanor of his fatal wounds 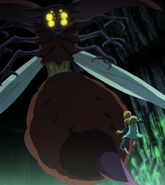