The Beastmen are one of the minor races in the world of Nanatsu no Taizai.

Beastmen are often persecuted by humans because they are seen as monsters and are blamed for unusual happenings. Most Beastmen have been chased out of their homes and lands and have resorted to stealing for food to survive. When a beastmen child was sighted in the mountains, the knights of Ravens instantly mounted an expedition to "hunt" him.

They appear to be a strong race, with sharp instincts and great speed, being able to avoid most attacks. They also seem to have the ability to take human form and switch back to their original form any time they like, however this may be an ability unique to Werefoxes as they are the only species of Beastman seen in the series and foxes in Japanese myth are famous for their ability to transform themselves into other creatures.

However, likely due to their animal like nature, Beastmen seemingly have much shorter lifespans when compared to humans. Despite only being 65, an age many humans live well past, and having been a fairly strong Beastman, Zhivago still died of old age, however it is unknown if this is true for all Beastman or if it varies based on the type of Beastman, as only Werefoxes have been seen in the show and thus no conclusion can be accurately made with such a small sample size. 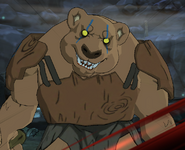