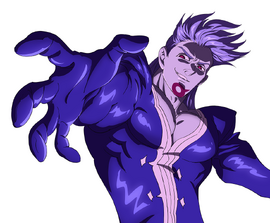 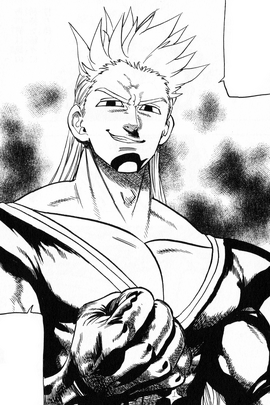 Leader of the Six Knights of Black

Bellion「ベルリオン」 is a member of the Demon Clan and the leader of the Six Knights of Black.

Bellion is a very tall and muscular man. He has red eyes and gray skin. His hair color is purple (white in the anime), and resembles Ban's hair from his wanted poster. He also has a red ring-like mark on his chin.

Bellion is brash, arrogant, and prideful, and seeks nothing more than to prove his status and power to all others, and is not above betraying his own allies to complete this goal. He is also spiteful and vengeful, holding grudges for being denied status or power and doing everything to get revenge or overpower those he feels have wronged him.

Bellion was a Demon that fought in the ancient Holy War against the Goddess Clan. During this time, Bellion aspired to be one of the Ten Commandments. At some point, he became the leader of the Six Knights of Black.

On one occasion, Bellion infiltrated the Celestial Realm like other demons. There, Bellion manages to easily kill a pair of Goddess soldiers. However, he is confronted by a battalion of goddess led by the Archangel, Mael. Despite defeating the soldiers, Bellion is overpowered by Mael's power. However, Bellion's life is saved at the last minute by the son of the Demon King and leader of the Ten Commandments, Meliodas.

Hoping to win the favors of Meliodas and climb the hierarchy of demons, Bellion offers to help him fight against Mael. However, Meliodas cruelly rejects it, calling it a hindrance. Astonished, Bellion cannot but observe how Meliodas manages to make Mael retire.

After this, Bellion meets with Pump, revealing that he is no longer interested in being one of the Ten Commandments. Instead, Bellion decides to seek the power to be on par with the man who broke his pride, wanting to know the landscape he saw to not even give him a look.

Bellion and the others Knights of Black were part of the battle against the four races in the Sky Temple, where an Indura brought destruction. When the victory of the Demon Clan seemed certain, the Great Oshiro appeared and defeated the Indura, allowing the Goddess Clan to seal the Six Knights of Black, the Indura and other Demons within the Egg Rock.

After 3,000 years, when the seal of the Egg Rock fall apart, the Six Knights of Black were released from their imprisonment and starts the ritual to release the Indura.

While Meliodas was fighting Pump, Bellion intervenes and starts a fight with Meliodas. Bellion did not recognize Meliodas and believes him a human, being irritated when this one states his despicable history with the Demon King and not be chosen to be one of the Ten Commandments. The fight remains almost tied until Meliodas releases his demonic power. However, Zoria appears and uses the Winged Sword to cut off Bellion's arm, despite getting stabbed by this one sword. When Meliodas was distracted with Zoria, Bellion manipulates his amputated arm to make Zoria use the Winged Sword to pierce Meliodas. Before he can finish Meliodas off, Ban and the Seven Deadly Sins stops him, forcing Bellion to retreat.

With all of his companions defeated, Bellion decides to sacrifices their souls in order to finally release the Indura, gaining a power boost and a new monstrous arm due to the influence of the beast's magic. When the Seven Deadly Sins try to stop the Indura, Bellion is confronted by Ban, but Bellion is able to defeat him. However, Meliodas interferes and takes over the fight. With the release of Meliodas' demonic power, Bellion finally realizes his foe's identity, just before being badly beaten. Bellion tries to use his Death Burn as a last resort, only for it to be reflected by Meliodas' Full Counter. Before dying, Bellion sacrificed his soul to the Indura as his body was obliterated.

As the leader of the Six Knights of Black, Bellion is a very powerful demon. His power is said to rival that of the legendary Ten Commandments.[1] In the past, he was strong enough to easily defeat multiple Divine Lance Corporal's all by himself.[2]

Like all members of the Demon Clan, Bellion is able to manipulate the mysterious jet-black power of darkness for various purposes like forming wings for flight and regeneration.[3]

Bellion possesses tremendous levels of physical strength, speed and durability, able to fight on par with a base Meliodas. He is also an extremely skilled swordsman, as shown when he fights evenly with Meliodas.[4]

Retrieved from "https://nanatsu-no-taizai.fandom.com/wiki/Bellion?oldid=136346"
Community content is available under CC-BY-SA unless otherwise noted.