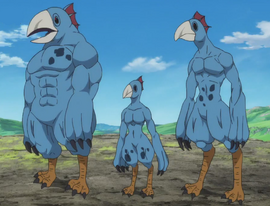 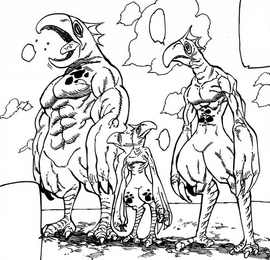 Blue Demons「青色の魔神 Aoiro no Majin」 (alternatively called Cobalt「 Kobaruto」) are a family within the Demon Clan.[1]

The blue demons are giant, bird-like creatures with muscular physiques. Their arms resemble wings and they have coxcomb-like features on their heads.

Like both the Red Demons and Gray Demons they seem to act as servants to the more powerful demons, though they are not mindless and capable of individual thought.

Four of them were among the demons Melascula summoned into the physical world in order to collect souls for the Ten Commandments to consume in order to restore their magic powers.

The blue demons are first seen when one comes flying by Diane, frightening her as it roams around villages, distributing posters for the fight festival. Once they're done, they return to two of the Commandments, but are one member short.[2]. That demon preyed on Sol and Della, but then got crushed by Matrona.

A pair of Blue Demons (Dolzzo and Calzzo) are part of the Fight Festival being the opponents of Ban and Meliodas. The demons attack them quickly, but the Sins limits to fool around among themselves without paying attention to them, ending up killing them in the process without realizing it.

The last Blue Demon, Quazzo, is killed by Silver.

A horde of Blue Demons ambushed Arthur, Nanashi and other soldiers in Camelot after they finished with a group of Gray Demons, forcing them to retreat.

Various Blue Demons were taking the human sacrifices from Ordan Village to be used to release the rest of their kind. Fortunly, Ban and Meliodas arrive and kill all the demons, freeing the prisoners.

Other Blue Demons are called by the Ochre Demon in Ordan to fight the Seven Deadly Sins, but all get eliminated by Meliodas's Full Counter.

Some Blue Demons are seen along a battalion of many demons fighting the Holy Knights, including Jericho and Guila.

Various Blue Demons are part of the Demon Clan army that is faced by the Holy Knights during the Holy War. They release their attacks against the knights. One of them is seen being killed by Deldry. The rest are eliminated by Diane's Queen Embrace and the Four Archangels's Omega Ark.

Various Blue Demon attacks Guila during the second wave of the demon army, but are eliminated by Elaine. Various others are killed by Matrona's Daichi no Kiba. An Blue Demon tries along with several other demons to devour Elaine when she falls, but all are killed by Ban.

They have the standard demonic power of darkness, being able to use it to form wings to fly. According to Meliodas, they are known for their speed.[3]

Blue demons also have the ability to fire explosive balls from their mouths.

Retrieved from "https://nanatsu-no-taizai.fandom.com/wiki/Blue_Demons?oldid=139998"
Community content is available under CC-BY-SA unless otherwise noted.