Episode 1 (S1)
Boar Hat (豚の帽子亭, Buta no Bōshi-tei) is a bar that is owned and founded by Meliodas.[1]

The Boar Hat was established after the Seven Deadly Sins were branded as traitors of Liones. Meliodas founded the bar in order to collect information about the whereabouts of his fellow comrades and information about many of the Holy Knights.[2] Although Meliodas is not a good cook, he has obtained a good collection of alcohol by his traveling to many different regions.[3] Elizabeth is later hired as a waitress in Boar Hat after she finds Meliodas and decides to join him in finding the other members of the Seven Deadly Sins.[4] It was revealed that Meliodas sold his Sacred Treasure, Lostvayne, to get the money to buy the Boar Hat.[5]

After Meliodas' death, the bar is run by Elizabeth for about a month until his resurrection. However, Hawk Mama, carrying the bar, is attacked by Derieri of the Ten Commandments and the bar is destroyed by the 52nd hit of her combo.[6]

After defeating the Demon King for good and Merlin revealing her intention to resurrect Arthur as the King of Chaos, Hawk Mama reverted back to an empty moss shell due to Chaos no longer residing inside of her, deflating her and causing severe damage to the Boar Hat.

Following the defeat of Cath Palug, the Boar Hat was restored and relocated in Liones, being run by Meliodas along with his duties as king. 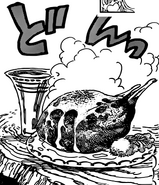 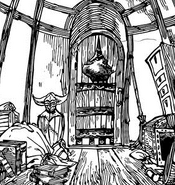 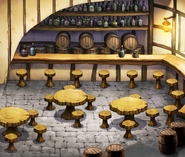 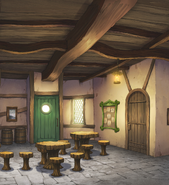 Entrance to the bar 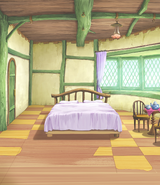