Break「, Bureiku」 is a power possessed by the Holy Knight Dreyfus.[1]

Break is shown to be an incredibly powerful ability which is manifested from the user's will. This ability is very versatile with it being capable of emitting energy blasts, helping the user to resist magic and being used for close combat. This ability was powerful enough to defeat the Serpent's sin of Envy, Diane, without much effort. Dreyfus claims that his power makes him invulnerable to corrosive attacks; stating that "[his] body will not rust, decay, or rot".[2] 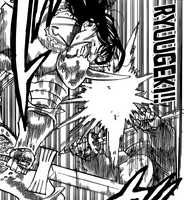