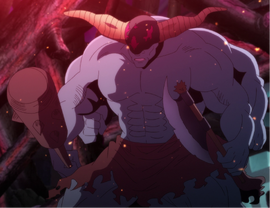 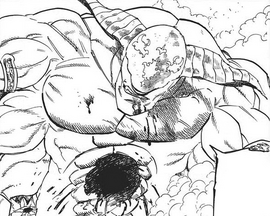 Member of the Ten Commandments (former)

Calmadios「カルマディオス」 is a former member of the Ten Commandments, who as their Piety, fought in the great war against the other four races 3,000 years ago.

Calmadios is a six-armed demon with blue-ish skin approximately the size of Drole. On his normally positioned pair of arms are an arm band each. He wears a black horned helmet with red patterns over his face covering his eyes and a dark loincloth held by a metal buckle.

Calmadios holds hatred against the Goddess Clan due the old rivalry between them and considers those who fought with them during the Holy War as mere dogs of the Goddesses.

He seems to still recognize Meliodas as the successor to the Demon King as he addressed the latter as 'Lord Meliodas' while wondering why he was going against his kind.

As one of the original Ten Commandments, Calmadios fought in the ancient Holy War against the Goddess Clan and the other races (fairies, humans and giants). At some point during the Holy War, Calmadios participated in an attack on a human settlement, where he faced off against Drole and Gloxinia. During the fight, Calmadios was overtaken by the ancient kings and was finally defeated when Meliodas joined them reflecting his attack with his Full Counter.

At some point, Calmadios lost his place in the Ten Commandments, being replaced as the Piety by Zeldris.

As a member of the Ten Commandments, Calmadios is an exceptionally powerful demon. Like all members of the Demon Clan, Calmadios is able to utilize the mysterious jet-black matter as shown forming wings for flight. [1]

He possesses tremendous strength and speed, being able to land a successful surprise attack on Drole, the Giant King, which slammed the latter into the ground with enough force to create a large shockwave though he wasn't able to wound the giant. He also has great endurance and durability as he recovered in little time when Gloxinia used Basquias to pierce through his abdomen and continue to fight effectively against both the Giant and Fairy kings.

He is also capable of shooting energy balls from his mouth.[2]

Calmadios' Commandment is that of Piety「 Keishin」. Meliodas warns against running away from him so as to not trigger the curse, as any who turn their back to Calmadios are treated as committing an act of treachery, and are cursed into serving the Demon King.

Retrieved from "https://nanatsu-no-taizai.fandom.com/wiki/Calmadios?oldid=151025"
Community content is available under CC-BY-SA unless otherwise noted.