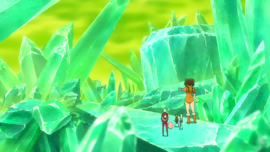 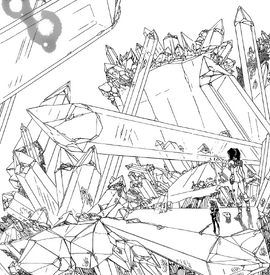 Capital of the Dead「の Shisha no Miyako」 is an crystallized dimension who works as the plane of existence where the souls of those who have died reside.[1]

The rumor about the area has led travelers and rich people to settle, and subsequently establishing the Tala Village at the entrance of the Capital of the Dead. A living individual cannot enter the place even if they just desire to. However, a common saying, "A priceless memory shared with the deceased will open the path to the capital," implies that a person who shares a precious memory with a deceased person can enter the place without dying.[2]

The Boar Hat gang decided to travel to the Capital of the Dead to find King who went there to find his deceased sister Elaine. They end up traveling there with Ban and King's memories of Elaine. Ban immediately notices a girl and rushes in her chase, with King, in turn, following Ban.

While Ban was away chasing the girl, Meliodas and Diane face off a Holy Knight named Guila who killed herself to be there and notice how dangerous she was, Meliodas told Elizabeth to escape with Hawk while the two fight. In response, Meliodas draws his broken blade and utilizes Full Counter against Guila, who reveals that she knows the ability and has created tactics to counter it.

As Ban was chasing the girl and King was following him, the two end up having another fight. King narrates how he came to discover his home to have been burned to the ground, then trapping Ban by transforming his pillow into a giant stuffed bear, and angrily reveals that the Guardian Saint whom Ban killed was his sister. When Ban, in response, declares that he is immortal, King uses his sacred treasure to petrify the immortal, as he'll never die and be stuck in that state as eternal punishment.

When Ban turns completely into a statue and King leaving him behind, he suddenly notices spheres of light approaching Ban, and as he recognizes the spheres to be Elaine, she kisses Ban in order to break King's curse. They exchange their greetings, when King confusingly yells at them, questioning whether Elaine was still angry at him for leaving her and his kingdom.

The three are distracted by a huge explosion some distance away. Noticing that a Holy Knight has arrived, Ban proceeds to head there, but only before telling Elaine that he will definitely make her his someday. Ban end up joining the fight but even with Ban on the team, they were getting badly hurt.

King continues questioning Elaine why she forgave Ban and not him, but Elaine explained to him why she couldn't forgive King so easily. Before King says anything else Elizabeth and Hawk comes running by whilst trying to escape from Guila.

King asks who they are, so Elizabeth and Hawk introduces themselves and that they are currently traveling with Meliodas. Elizabeth tells him what is happening in the battle field who in response, ask him to help her, but when he refuse, King was surprised by Elizabeth bravely tells him to run away instead and tries to borrow his spear to fight against Guila. Feeling inspired by Elizabeth's bravery, King activates levitates and heads to the battle.

As the battle continues, the Sins were losing but then King arrived and offers to help them and fight Guila alone. After King defeated Guila with ease. Elaine revealed that King was the Fair King of they home Kingdom. King then turns away from the defeated Guila, but Guila gets out of the rubble and attacks King. King then saved by Meliodas and notices that Guila's presence has left.

Afterwards King along with the rest are rejected by the capital, which Elaine thanks him for protecting Ban before they leave.

After bringing Zaratras to Meliodas' body, the former Great Holy Knight asks Elizabeth if she went to the Necropolis to see Meliodas and she confirms this, having went with Hawk some point after Meliodas' death to see him one last time but didn't find him there, not knowing he was in Purgatory waiting for his resurrection.

Entrance to the Capital of the Dead

Transporting method to the Capital of the Dead

Retrieved from "https://nanatsu-no-taizai.fandom.com/wiki/Capital_of_the_Dead?oldid=154219"
Community content is available under CC-BY-SA unless otherwise noted.