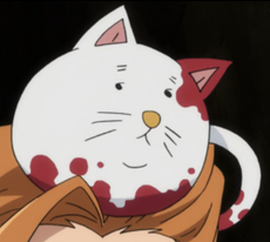 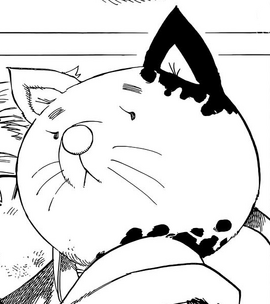 Cath「キャス」 is Arthur Pendragon's mysterious pet that he gained after training in Istar.

Cath is a cat-like creature that appears to be just a small cat head with a tail. Its fur is white with red markings.

Not much is known about Cath's personality, as it has remained mostly silent other than sneezing at times. It prefers to stay on Arthur's head (and later his shoulder), and has refused to leave Arthur's side. Cath has the ability to talk, and has stated it is happy that Arthur is growing stronger. Cath appears to enjoy chewing on Arthur's hair and his cape.

Originally a creature born from mother of chaos, it was reincarnated from Greed and obsession for Power, its objective is to be King of Chaos itself, The tyrant beast challenged Chaos, it lost the fight and continued its misdeeds and eventually sealed away by Goddess Clan, not much is known about Cath's history or how Arthur managed to find it after training in Istar.

After leaving Istar, Gowther tries to remove Cath from Arthur's head, but cannot do so and only ends up hurting Arthur. Gowther notes that Cath seems to be stuck to Arthur. [2]

Cath is still with Arthur when this, Nanashi and other Camelot knights fight against a horde of Gray Demons. When hearing it speak, Arthur is surprised and Nanashi affirms that Arthur would not die while Cath is with him. When the group is forced to retreat before the arrival of a Blue Demons horde, Cath agrees with Arthur that he must become stronger.

Cath along with Arthur is hidden in an underground shelter with the other survivors of Camelot. When Arthur arrives with Orlondi, Cath launches on this and keeps quiet about showing off.

Cath accompanies Arthur when he decides to go on his own to the castle of Camelot and recover the holy sword Excalibur. Being caught in the Marchen Maze of Peronia, Cath takes advantage when Arthur is attacked by a Gray Demon to approach Peronia from behind and apparently devour her.

After entering the castle, Arthur and Cath are surprised by Zeldris and Cusack. Cath decides to give Arthur the possibility of running away by levitating several objects around and attacking the demons with them. However, Cath is defeated and seriously injured.

When Arthur is able to wield Excalibur, he gives several cuts to Cusack to retrieve Cath and take him out of the castle. Arthur apologizes to him for making him suffer, to which Cath tells him he is hungry and Arthur says they will eat when they are finished.

After Arthur failed to defeat the demons, Cath points out that his magical power is still not awake and that he will not win if it does not wake up. When Arthur suffers the effects of brandishing Excalibur, Cath sends a telepathic message to Merlin warning her that Arthur will die.

When Merlin manages to remove Cusack with her Icicle Castle, Cath is teleported with Arthur to the Boar Hat in Liones. Hawk is alarmed to see him hurt but Cath insists that they must worry about Arthur. However, Arthur falls victim to Cusack's Resonant, piercing his own heart with Excalibur. Cath looks horrified to see such a fact.

When Arthur dies, Hawk tries to comfort Cath, but it is intimidated by the monstrous expression of this one.

Cath remains next to Arthur's body in the Boar Hat, until Merlin decides to carry out Arthur's awakening as the "King of Chaos". Seeing Arthur alive, Cath rejoices and jumps into his arms, but surprisingly tries to devour him. Meliodas manages to save Arthur, but Cath ends up ripping an arm and eating it, undergoing a monstrous transformation. The Lady of the Lake tells them that they must retrieve the arm or they will soon know how powerful even a fragment of Chaos can be.

Cath's abilities and purpose are currently unknown, but Nanashi has stated that Arthur will not die as long as Cath remains with him.

Retrieved from "https://nanatsu-no-taizai.fandom.com/wiki/Cath?oldid=139512"
Community content is available under CC-BY-SA unless otherwise noted.