According to the Lady of the Lake, the Celestial Realm was created along with the Goddess Clan by the Supreme Deity, after she was given birth by Chaos.[1]

Not much is known of the Celestial Realm, except that it was essentially composed of "Sky Palaces"「天空宮, Tenkū-kyū」 built on floating islands, themselves suspended in the clouds. These "Sky Palaces" can be connected to the rest of Britannia by portals generally located in the altars of the Druids[2], or the Light of Grace.[3]

After the end of the New Holy War, Mael returned to the Celestial Realm, promising Sariel and Tarmiel to protect it until they revive. There, several Goddesses appear having recovered their physical forms and vow to follow Mael in their new mission. However, the Goddesses, under the control of the Supreme Deity, will eventually attack him, forcing him to flee the Celestial Realm. 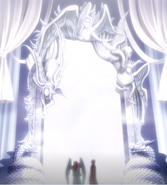 The gate leading to the Celestial Realm in Stigma's headquarters.

Mael and other Goddesses in the Celestial Realm.