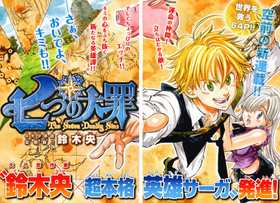 The third princess of the Kingdom of Liones, Elizabeth, finds Meliodas, who is the owner of the Boar Hat bar and is also one of the Seven Deadly Sins, being the Dragon's Sin of Wrath. The princess then joins him in his journey to find the other Deadly Sins in order to defeat the Holy Knights, who have orchestrated a coup d'état and have overthrown the king.

In a bar, a young man, Meliodas, serves his nasty food to customers in his establishment, the Boar Hat, and his talking pig, Hawk, who cleans up the scraps that the customers vomit. Just then, the enigmatic and infamous "Rust Knight" appears, scaring all of the civilians and causing them to report the Rust Knight being in the Boar Hat to the knights of the Beard of the Mountain Cat order. The Rust Knight is revealed to be female and had fallen unconscious after coming to the establishment, awakes and is presented with some of Meliodas' terrible dishes which brings her to the point of tears.

As the girl begins to explain that she was wearing armor while trying to searching for the Seven Deadly Sins, the knights of the Beard of the Mountain Cat, led by Alioni, demand that Meliodas and her come out, having received the civilians' report. While Meliodas and Hawk try to stall them, the girl escapes from the back door and into the woods, being pursued by the knights. They are all defeated, however, thanks to Hawk, and she continues, saying that she was searching for the Seven Deadly Sins to defeat the Holy Knights, who, a few days ago, had orchestrated a coup d'etat and had forced the kingdom's citizens, including but not limited to children and the elderly, to participate in military activities.

Suddenly, the portion of the cliff they were standing on is cut off by the Holy Knight Twigo, who, after Hawk and the woman are rescued by Meliodas, discovers her true identity as Elizabeth, the kingdom's third princess. Meliodas rescues Elizabeth from Twigo's next attack, and saves her for a second time, as she is about to give up, unable to see Meliodas, whom she thought was an ordinary civilian, lost his life. Twigo goes nearer and deals the finishing blow, but is surprised to discover that it was instead him who had taken damage. Meliodas then reveals his identity as one of the Seven Deadly Sins, the Dragon's Sin of Wrath, and quickly defeats Twigo.

He then offers for Elizabeth to join him, which begins their journey.