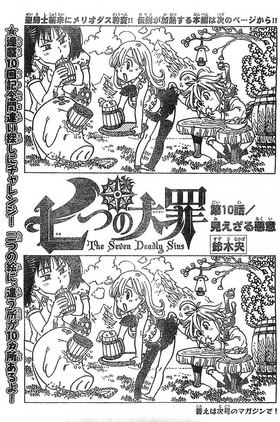 5
An Unseen Malice「見えざる悪意, Miezaru Akui」 is the 10th chapter of manga, Nanatsu no Taizai.

Meliodas regains consciousnesses and doesn't let go of his weapon, and releases a powerful aura, which causes Golgius to escape, knowing that he will be defeated. As Meliodas and the two find him, it is revealed that Dana was forced to poison Meliodas since Golgius had taken his daughter as hostage. Meliodas, protecting Elizabeth from every one of the Holy Knight, soon defeats him.

Meliodas, who is somehow alive despite the poison, much to Dana's surprise, regains consciousness, and mysteriously has completely jet black eyes and a strange symbol on his head. Releasing a powerful aura, he then declares that he wouldn't let go of it even if he dies, and that this was the only way he could atone for his sins, and then frightens Golgius to the point that the Holy Knight flees, knowing he would be defeated. When Elizabeth then questions him whether he is Meliodas, the Deadly Sin's eyes have become normal, and the strange symbol, disappeared. After explaining to Meliodas as to where they were, Meliodas removes his bandage, which reveals that his wound has already healed, something that puzzles even him. Golgius is then seen to be stating that if he had retreated even a moment later, he would have been defeated, and comments Meliodas to be interesting, as he is quickly found by the three due to Hawk's superior sense of smell. In response to Meliodas commanding him to tell them the identity of the person who had ordered him to bring Meliodas' broken sword and Elizabeth, Golgius immediately surrenders and raises his hand, saying that he was of a cowardly nature and disliked fighting, especially someone of Meliodas' caliber.

Meliodas, however, having noticed the blades that Golgius secretly threw at Elizabeth the moment he raised his hands, blocks them with his sword. Just then, Dana also finds them and demands that Golgius return his daughter, since though the poison didn't kill Meliodas, he had made him drink it. Suddenly, Golgius disappears, and telling Dana that he will return his daughter, stabs him fatally from the behind as he appears again, adding that it will only be in the next world, where she will join him shortly, since the fact of the Holy Knights ordering citizens to poison children becoming known would not be good. Elizabeth goes near Dana, and Golgius, disappearing again and appearing near her, attacks her, only to be stopped by Meliodas. He, however, disappears again before Meliodas can retaliate, and confirms Hawk's theory that his ability is teleportation. Despite his abilities, however, he is unable to harm Elizabeth due to Meliodas blocking all of his attacks. Meliodas then instructs Elizabeth and Hawk to escape, and as he runs with them, continues to block Golgius' attacks on the former; he also seems to be alarmed when Hawk mentions that he is able to trace Golgius' smell.

While running, Meliodas leads them to an abandoned building, informing Hawk that he did so to not involve the townspeople in the battle, and then slashes his sword in the air toward the door of the room, comically claiming to Hawk that it was a magic spell that would prevent Golgius from coming it. Hawk states that though the Golgius' intention was to kidnap Elizabeth, he repeatedly tried to kill her, with Meliodas answering that he did so since he know the young man would protect her no matter what, and was forcing him to protect her while waiting for an opening. As Hawk also questions Meliodas if hiding on the top floor of a narrow building, with no way to escape, was safe, the latter informs them that against the teleportation ability, location didn't matter, and that Golgius could even appear in the middle of the room. Suddenly, however, Golgius appears behind him, but falls for Meliodas' trap - a cut on the floor of the entrance that he had set up while pretending to merely slash his sword - and falls down to the bottom of the building. There, the Deadly Sin reveals that Golgius' ability is actually transparency, an ability akin to invisibility, and includes that he discovered so due to the time the Holy Knight took to reappear after vanishing and Hawk being able to smell him. Since he was only becoming invisible, the only way for him to enter the room was through the door, and Meliodas thus set a trap on the floor of the entrance. Also stating that he doesn't have to worry about Elizabeth's safety there, Meliodas attacks Golgius at point blank range.