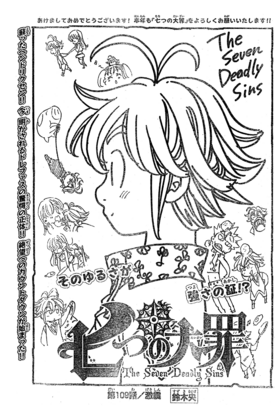 Earthquake「激震 Gekishin」 is the 109th chapter of the manga, Nanatsu no Taizai.

A fully restored Hendrickson begins to open the gate stating all preparations are complete. He begins chanting in a mysterious language to break the seal as the portal releases a massive amount of energy. Fraudrin, expecting this to happen, retreats to a safe distance away. Hendrickson's body is being ripped apart but he continues the chant, stating he will revive the Demon Clan, no matter the cost. He completes the incantation and the seal is broken, releasing a massive amount of energy and triggering a huge earthquake.

Fraudrin returns, musing to himself that he didn't expect the Goddess Clan's trap to be so powerful, and how he was right to prepare a decoy to activate it. He stands before Hendrickson, stating if he was not also "ash" as well as "blood" he would have been obliterated and wonders if even he could have withstood it. He praises Hendrickson for completing the ritual and states that as a reward he will let him live, and that it is Dreyfus' wish as well. A confused Hendrickson takes note of his eyes and symbol and screams to be told what's going on only to suddenly notice nine, terrifying presences behind him.

Fraudrin excitedly greets his comrades, as it has been 3,000 years, and Hendrickson turns to see nine demons standing behind him. The fully amored demon notes that they truly have been sealed for a long time because if they were living naturally they would have already died three times by this point. A woman with a scarf of darkness asks "Fraudrin" if the body he is inhabiting is human, to which he gladly admits, stating he values it highly. the octopus-like demon asks why they were the only ones who were able to escape, with Fraudrin apologizing stating he did not have enough of the Apostle of the Goddesses' blood to break the seal completely. A woman who speaks strangely and the man who translates what she is saying both note that there are very few goddess, giant, and fairy presences around to which Fraudrin explains that they lost most of their power in the war, just like them, and as things currently stand the humans are the ones ruling Britannia. The woman with the scarf is shocked, stating that humans are the weakest the five races, and the armored demon angrily demands to know how Fraudrin could have let this happen, as he was the only one not sealed. Fraudrin explains that he faced his own issues and had only awoken ten years early, and the Seven Deadly Sins were a hindrance to carrying out his plans. Most of them stare curiously at what this could mean while one of them understands that Meliodas must be involved. Hendrickson confused by the familiar voice turns... And we cut back to the Kingdom of Liones, as the Sins are walking back from hearing the king's prophecy, a huge earthquake erupts. The others are shocked and confused while, Meliodas, realizing what this means and who has been set free, shakes in a brief moment of panic.

We cut back to see that the voice was from someone who looks almost identical to Meliodas. The armored demon wants to hurry and kill the humans and take over while the woman with a strange speech pattern wants to rest. Meliodas' look-alike agrees with her, noting that the seal drained them of all their magic power. After Fraudrin informs them of their present location, Meliodas' look-alike notes that Edinburgh Hill should be just east and the ten powerful demons depart, leaving a terrified Hendrickson alone to take in all that has happened.

Retrieved from "https://nanatsu-no-taizai.fandom.com/wiki/Chapter_109?oldid=91056"
Community content is available under CC-BY-SA unless otherwise noted.