Even If You Died 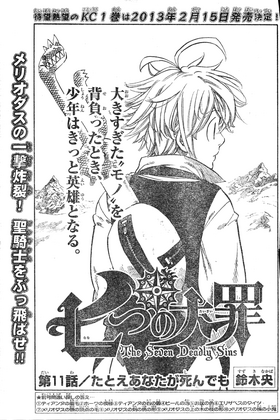 5
Even If You Died「たとえあなたが死んでも, Tatoe Anata ga Shindemo」 is the 11th chapter of the manga, Nanatsu no Taizai.

Defeated, Golgius manages to use a small distraction to escape on a horse. After Dana dies, lamenting his inability to rescue his daughter, Elizabeth blames his death on herself, since if she hadn't found Meliodas, they wouldn't have arrived in Dalmary Town, and the doctor would not have died. After Meliodas encourages her, both, and Hawk, start walking towards the Baste Dungeon in order to rescue Sennett, Dana's daughter, and find Ban, when they suddenly encounter Diane, who seems to have no memories of her defeating Friesia. Meanwhile, Ruin and Friesia are shown to have prepared to fight the two Deadly Sins.

The chapter begins with Golgius being sent flying out of the building by Meliodas' point-blank attack, and hitting a wall on the street, which creates a crater. As Meliodas questions Golgius about the person who had ordered him to bring the broken sword and Elizabeth, the Deadly Sin is distracted for a brief moment by Elizabeth coming out of the building, the moment being enough for the Holy Knight to disappear and escape. A horse is then seen running away from the battle scene and Hawk believes it to have been frightened due to the noise of the battle, but Meliodas immediately realizes the horse to be ridden by an invisible Golgius. His theory is proven when Golgius appears, and riding the horse, comments that his superiors had given him a crazy mission. Meliodas and Hawk then decide to head for the Baste Dungeon, but Elizabeth goes toward the dying Dana. When she cries for him, he apologizes for trying to kill Meliodas, and laments his inability to rescue his daughter, Sennett, commenting that he reaped what he sowed, with his hand then falling, implying that he has died.

Elizabeth, in sorrow, blames herself for his death, stating that if they hadn't come to the town, Dana wouldn't have been forced to poison Meliodas and wouldn't have died. She also adds that if she hadn't found Meliodas, Gilthunder wouldn't have given him a grave wound, and Golgius wouldn't have nearly killed him with with his scheme. In response to that, Meliodas tells that while he understands the events that occurred making her cry, questions whether her resolve to protect the kingdom's citizens from the Holy Knights so weak that it could be broken by "a tear or two", declaring that since he has resolved to do so and find the other Seven Deadly Sins, he would fulfill his promise with her even if she were to die. He proceeds to also state that all people eventually die, and as he does so, a flashback starts, with, in the flashback, Meliodas standing over a dying woman named "Liz", who asks him to promise her that though he can forget who he is, he must never forget the principles her stands by. The present Meliodas continues to say that even so, if someone protects what that person stood by, their principles will never die, and once someone has resolved to take on the principles, they must follow through with them, no matter how much blood and tears are shed; he finishes his speech with saying that this is what a knight is. As he says so, in the flashback, Meliodas, is seen hugging the woman named Liz, who seems to have died, while crying.

Not long after, as Meliodas and Hawk start for Baste Dungeon, the latter questions the former whether he was going to leave Elizabeth in the town. He Sin of Wrath calls the talking pig stupid, explaining that it was better for her to stay there since the Holy Knights were keen to capture her. She, however, runs toward them and gives Meliodas his bag, which she had fixed during his sleep, and joins the two and, having been encouraged by his earlier speech, declares back that even though she isn't a Holy Knight, she will continue to fight for the people of the kingdom even if he were to die. Suddenly, they encounter someone, causing Meliodas to get alarmed and immediately cover Elizabeth, but the person is revealed to be Diane, who seems to have no memories of defeating Friesia's insects and leaving for Baste Dungeon, implying that her memories have been erased. Meanwhile, as Golgius returns to the dungeon, he encounters Ruin and Friesia, who have finished their preparations to fight the two Deadly Sins.