The Man Has His Say 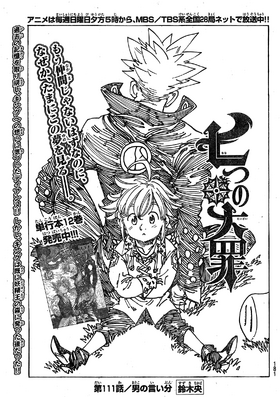 The Man Has His Say「男の言い分 Otoko no Iibun」 is the 111th chapter of the manga, Nanatsu no Taizai.

The chapter begins the Fairy King's Forest with King asking Jericho why she is still there. She replies that she'll leave when Ban leaves. King questions Jericho's feelings for Ban and informs her that it's hopeless as he has absolutely no interest in her. Jericho simply states that she'll just stay close to him until he does and she has an advantage over Elaine by being alive. Ban, who was listening to this, disagrees and forcibly stripes her. King asks Ban to return with him one last time, and Ban refuses stating that Meliodas forgiving him for his actions so easily is part of the reason he can't return. He then informs King that he wasn't lying about Diane being in love with him, having overheard her say it before he left. King is stunned and Ban tells King to return to Diane with a smile on his face.

Meanwhile, back in Liones at Merlin's research facilities, she is giving Gowther some special medicine, stating it is crucial he takes one everyday until she is done building him a new suit of armor. Diane and Elizabeth then arrive, with Diane being hysterical about King seemingly disappearing. Merlin assures Diane that King is fine and says she has other more pressing matters to attend to. Gowther states he understands Merlin's instructions but once he steps outside he spits the pill out and throws the others away as well. Meliodas arrives asking Gowther if he needed to speak to Merlin too and that he should be prepared to leave soon. Gowther asks if this is an order and when Meliodas says "not exactly" refuses. Meliodas notices something is wrong but Gowther replies that he simply acting according to his own will an then leaves with Guila. Diane and Elizabeth notice Meliodas as they are leaving, and Elizabeth awkwardly avoids speaking to Meliodas despite Diane's encouragements.

Meliodas enters and greets Merlin who is busy working on something. She said she expected him to be coming by soon and he Meliodas demands that she returns what she stole from him 10 years ago when they were fleeing the kingdom. She aks if this has to do with the massive earthquake from the previous day and he informs her that was a sign that the Demon Clan's seal had been broken. Merlin infers this means Hendrickson is still alive but Meliodas states that Hendrickson is not the issue, but the ones he revived, are the absolute worst:The Ten Commandments, the elite force serving directly under the Demon King. Merlin is noticeably shaken by this news as objects begin swirling around her laboratory as she suggest that get into their serious discussion.

Moving on to Guila and Gowther walking home, he asks her if she loves him and before she can respond, Guila's younger brother, Zeal, arrives wanting to desperately speak to his sister. Gowther informs Zeal that if he needs to talk he can always talk to him, threateningly displaying his power.

The Last Page of Chapter 111

Retrieved from "https://nanatsu-no-taizai.fandom.com/wiki/Chapter_111?oldid=149620"
Community content is available under CC-BY-SA unless otherwise noted.