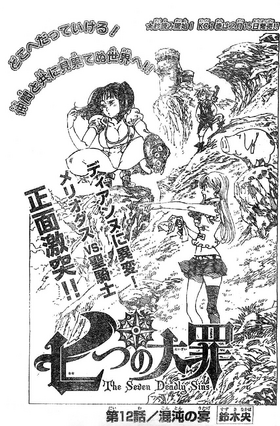 5, 6
A Chaotic Party「混沌の宴, Konton no Utage」 is the 12th chapter of the manga, Nanatsu no Taizai.

Whilst trying to recall what the events that had occurred, Diane abruptly sees an illusion of Ruin in place of Meliodas, and as a result, begins attacking Meliodas, causing the three to escape. Meliodas is soon deluded in the same way as Diane, and the two begin battling. Meanwhile at the Baste Dungeon, after having defeated Jericho, Ban discovers Sennett.

Diane tries to remember the events, and Meliodas then tells Elizabeth that saving Sennett was their main priority, and also that Ban would escape imprisonment himself if he discovered them coming. Suddenly, Diane discovers Ruin, and also that the young man Elizabeth have vanished. When the Holy Knight claims to already have them, she attacks him, but is revealed to be under an illusion, causing her to see Ruin in Meliodas' place and attack him, while believing she is attacking the Holy Knight. Meliodas, immediately realizing that Diane was under an illusion, flees while carrying Elizabeth, with Hawk running behind them, and upon finding two civilians, one of whom is a young boy, walking nearby, takes them along, since they will be dragged into the battle. As they three, and the two frightened civilians, who are revealed to be shepherds from Dalmary Town, hide, Meliodas also falls under Ruin's hypnosis when he tries to look at Diane, which makes him see Ruin in her place the same way she sees Ruin in his.

Thinking he is attacking Ruin, he jumps up, rolls and slashes from above, with Diane blocking it with her fist and responding by raising sharp pillars from the earth toward him, with he deflects. As Elizabeth, Hawk and the two shepherds try to escape, Friesia is seen enjoying the battle and disappearing after commenting that it was now his turn. Elizabeth then desperately wonders as to what she could do to stop the battle. In the Baste Dungeon, Jericho, orders her subordinates to gather all soldiers and find Ban, and as she orders them to also bring a change of clothes and armor, is shown to have been disrobed by Ban in order to get armor and clothes. Somewhere else, Ban throws the armor he had stolen, since it was too small for him, and discovers a guard looking lustfully at a captive woman, who is revealed to be Sennett, Dana's daughter, who was kidnapped by Golgius. Showing interest, he proceeds to smash the guard's face in the bars and then bend them, entering the cell while declaring to the lady that she was his.