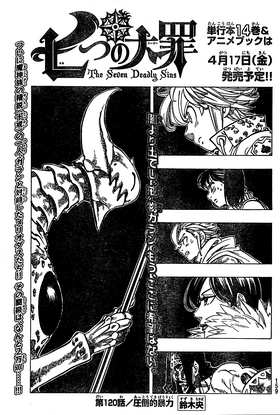 Everyone is surprised by the unexpected appearance of one of the Ten Commandments. Merlin notes that his power level is very surprising but that something feels off and asks what the reading for his magic power specifically is. Hawk replies that it's "0" and Merlin surmises that it must be a lingering effect of the Goddess Clan's seal. Diane realizes that now is there best chance to defeat him if that's the case as Galand approaches and gazes at the city. He notes that humans have changed quite a bit over the past 3,000 years but the way they swarm together hasn't changed at all. Feeling too confided, he destroys a large part of the city simply by lifting his spear, killing many people in the process. After he dust settles he inquires that Meliodas and he have a little match, as he's always wanted to do so.

Meliodas instantly strikes Galand in the neck with his sword, seemingly knocking him back, only to immediately impaled by Galand who easily rights himself. At that moment two more Meliodases come in for an attack, but Galand effortlessly slices them in half and then lauches one more attack, creating a great maelstrom. Everyone else is being blown back, but Merlin protects Arthur, Elizabeth and Hawk with Perfect Cube. Galand notices the fakes disappearing but realizes that they are more than mere after-images.

Sladers comments on the dire nature of the situation while Diane rushes in. Merlin causes Diane to grow back to her normal size and teleports her clothes and Gideon as she moves in for the attack. Galand laughs it off and easily kicks Gideon back into Diane's face, sending her flying. Merlin thinks that Galand's power far exceeds her expectations and that they need more time to prepare, attempts to teleport Galand away...but then he vanishes. Everyone else thinks that Merlin moved him, but she corrects them that he instantly moved out her rage of several miles simply by jumping. Galand then immediately returns behind Merlin.

Retrieved from "https://nanatsu-no-taizai.fandom.com/wiki/Chapter_120?oldid=92735"
Community content is available under CC-BY-SA unless otherwise noted.