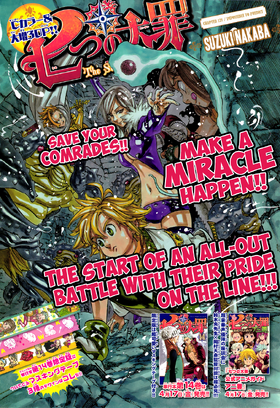 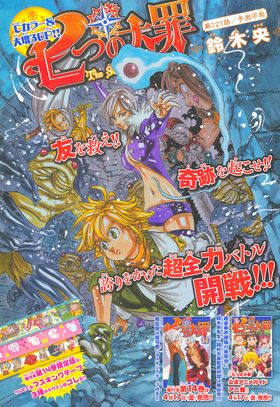 The battle with Galand comes to an end.

Galand states that he hates mages like Merlin more than anything else and moves into strike. Slader gets in between them and tries to use his Overpower on Galand, but it has no effect and he swipes Slader away, who thinks his overwhelming pressure is like a mountain. Galand then turns his attention back to Merlin, who asks to make a deal. Merlin admits that Galand's strength as one of the Ten Commandments who serves directly under the king of the Demon Clan far exceeds her imagination and that he could easily kill them all. In lieu of this, she asks that he spare all of them and tell her the Ten Commandments' goal, and in exchange she will offer them any aid she can. In reality, she is simply trying to buy time in order to think of a way to force Galand to retreat without Camelot incurring any more causalities or destruction but then she is suddenly struck with a strange feeling...

Meliodas yells for Merlin to stop and Galand guesses that she has been lying to him. Merlin then turns to stone. Everyone is shocked by what they've just witnessed and Galand gloats that he is the Truth of the Ten Commandments, and that anyone who lies to him will be turned to stone. He claims this Commandment given to him by the Demon King is absolute and prepares to shatter Merlin when Meliodas comes in. The knights of Camelot follow suit and Slader moves Merlin out of the way. Galand then easily kills all of his attackers, except Meliodas, who he cuts off both of his arms and then kicks him in the face.

Losing a lot of blood and noticing Elizabeth is safe inside of Merlin's Perfect Cube, Meliodas says he has no other choice and lets his demon power fully out. Galand notices the transformation and Meliodas quickly attacks, kicking him in the stomach and launching several attacks of darkness. Meliodas struggles to control himself and hits Galand with his most powerful attack, boring a giant hole in the earth. Hawk notes that Meliodas' power level is currently 10,3000 and is amazed at him controlling that power. Galand is also astonished...at how far Meliosas has fallen and throws his spear through the darkness into Meliodas' chest. He emerges, unharmed, stating he no longer finds this battle entertaining. He reclaims his spear and tells the traitorous warrior, Meliodas, and those foolish enough to oppose the Ten Commandments to regret their powerless, in the afterlife. He then stabs Meliodas in the head, splits Diane in half, stabs Slader in the gut, shatterin Merlin and then steps on her head. He also attempts to kill Arthur and Elizabeth but Perfect Cube is still active and prevents him from doing so.

He then bids them tells them they are very fortune and bids them farewell, and leaves. He laughs that it was enough to wake him up at least. Elizabeth, Hawk, and Arthur are left crying, only to be surprised by the appearance of Gowther, back in his human-form. The final scene is Gowther, naked and laughing over everone's dead bodies.

The Last Page of Chapter 121

Retrieved from "https://nanatsu-no-taizai.fandom.com/wiki/Chapter_121?oldid=149631"
Community content is available under CC-BY-SA unless otherwise noted.