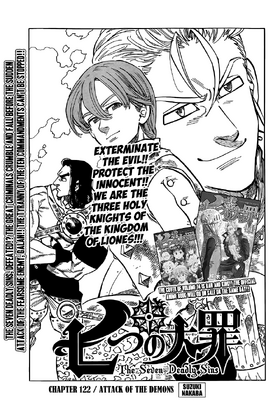 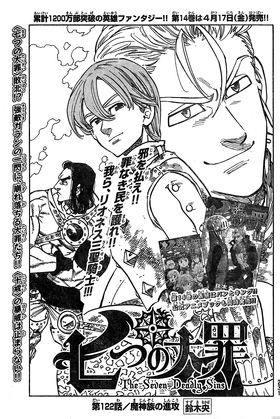 The Demon Clan Advances「魔神族の進攻 Majin-zoku no Shinkō」 is the 122nd chapter of the manga, Nanatsu no Taizai.

The Ten Commandments send out lesser demons to collect souls for them, and Gilthunder, Howzer, and Griamore met Hendrickson while fighting some demons.

Back at Edinburgh castle, the Ten Commandments are pondering why it's taking so long for their magic to be replenished. Zeldris laments that the rich magic that used to flow throughout the land has been almost entirely depleted and the mustachioed demon asks how something like this could have happened when the Great War was over that magic to begin with. Fraudrin tells them that there is no need to for such pessimism just yet as two humans approach them, demanding that they leave Edinburgh, believing them to be a rival mining group.

As Fraudrin explains that the magic from 3,000 years ago has not be lost, but simply recycled through all of the living beings of the land, the nude female demon approaches one of the human men and forces out and eats his soul. The other female demon asks how it taste and the naked woman replies with "Two birds with one stone". The mustachioed demon interprets this to mean that the souls are delicious, and that by eating them they will be able to replenish their lost power while wiping out the humans at the same time, while he takes the other human's soul. Hearing this, the other women decides that it would be easier to have their "honeybees gather a lot of honey for them". She uses a move called Summon Ring and asks Fraudrin if there are any large human settlements near by.

We then switch to Gilthunder, Griamore, and Howzer, on their way to called Byron. Gilthunder becomes annoyed by Griamore and Howzer's bickering and then notices some people standing in the road. They check on them, and although they are neither sleeping or dead, they aren't responding. Griamore suggests to bring them into the town and then the trio hears screams.

In the town a red demon is gleefully collecting the townspeople's souls. The three holy knights working together manage to kill the demon and rescue all of the people's souls, with Howzer noting it had the same off-putting power as the New Generation. Gilthunder then notices another presence and tells everyone to get away. A gray demon appears and Gilthunder notices that its dark power is the same as Hendrickon's and that it is likely the same breed of demon that he fused with. Just then, a voice tells them that it is a gray demon and that they should not assume it'll be as easy to defeat as the red one. The three are shocked to see Hendrickson alive and standing before them.

Retrieved from "https://nanatsu-no-taizai.fandom.com/wiki/Chapter_122?oldid=93426"
Community content is available under CC-BY-SA unless otherwise noted.