A Reunion With Despair 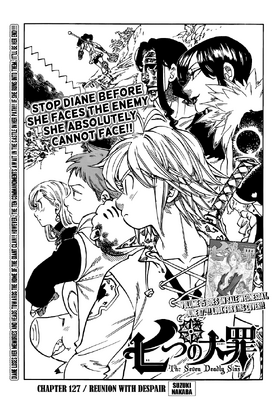 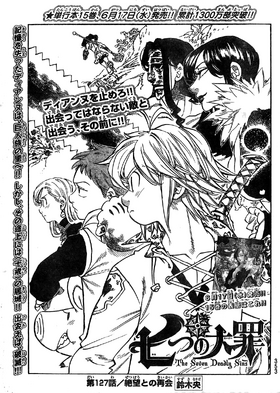 A Reunion With Despair「絶望との再会 Zetsubō to no Saikai」 is the 127th chapter of the manga, Nanatsu no Taizai.

Diane runs into the Ten Commandments and is saved by Matrona.

The chapter opens with the Boar Hat group heading towards the Giant Clan's village, Megadozer. More than 300 miles away, they're making good time but King asks why Merlin doesn't simply teleporting them there. Merlin apologizes, saying it's taking everything she has to keep her soul in her sacred treasure and that she would like to save her magic in case of an emergency. King doesn't understand but Merlin explains that from the ruins of Edinburgh caste, directly in Diane's path, she senses a tremendously evil presence.

Back at Edinburgh, Galand reports to the others that he has killed Meliodas. Fraudrin is skeptical that Meliodas would be defeated so easily but Galand sarcastically asks if he doubts Galand "The Truth", which Fraudrin denies. Noticing something in the distance, Galand decides to go for another walk.

Moving to Diane, she tearfully decides that she must return to Megadozer and inform everyone that Matrona died protecting her. Chastising Matrona for not following her own advice, Diane suddenly notices the destroyed castle in front of her, and feels a terrible presence behind her. It is Galand, who asks her why she is still alive.

Diane shakes in fear, questioning what is behind her, before deciding that the best thing for her to do is run as fast as she can without thinking. Before she can get very far though, she is stopped by another member of the Ten Commandments, who finds the prospect of eating a giant's soul very enticing.

Galand refers to him as Monspeet and says he must have a very good nose. Monspeet says that eating a few human souls has only made him hungrier. Galand asks if he's doing this for "Derieri" to which he denies, saying he only wants to sooth his hunger pains. Throughout the conversation, Diane is shaking, wondering who and what these people are. Galand repeats his question, asking why Diane is alive and Diane tells him she has no idea who he is. He tells her not to lie as he definitely remembers her face and war hammer. Diane screams for Galand to get away from her and swings Gideon at him, but it doesn't even move him.

Galand notes that Diane is not being petrified and so must not really remember, and that he also failed to kill her. Not detoured, he says he'll make sure she dies this time. He jumps and knees Diane in the stomach, sending her flying towards Monspeet. Monspeet then says he'll be eating Diane's soul, but is then suddenly struck by an earth attack.

Galand is taken by surprised by this and is suddenly hit by an attack called Saiha. He questions who would be foolish enough to attack the Ten Commandments, only to be enclosed in earth by an attack called Gokuaku. Diane, witnessing all of this, can't believe what she's seeing, Matrona, alive and well in front of her.

Retrieved from "https://nanatsu-no-taizai.fandom.com/wiki/Chapter_127?oldid=95160"
Community content is available under CC-BY-SA unless otherwise noted.