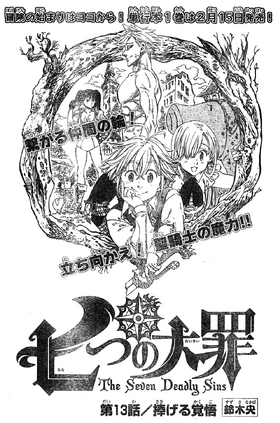 Ready To Sacrifice「捧げる覚悟 Sasageru Kakugo」 is the 13th chapter of the manga, Nanatsu no Taizai.

After Ban releases Sennett from her chains and steals her hidden dagger, he is confronted by Jude. At the same time, Meliodas and Diane continue their battle, when Friesia, taunting Elizabeth's declarations of putting her life on the line to save citizens, attacks the younger shepherd. Elizabeth bravely enters the attacks to rescue him, and suffers severe injuries, but then realizes that the child was actually a disguised Ruin. Though the Holy Knight severely injures her, she manages to remove the source of his illusions, his staff's bell. Before he could kill her in anger, however, Meliodas, having regained his senses, stops the Holy Knight.

Entering the frightened Sennett's cell, Ban takes the dagger that she had hidden under her clothes. He unsheathes it, noticing the five hawthorn symbols, recognizes it as a weapon made by the master weapon smith, Tarbas, and comments on his good quality, testing its sharpness by cutting Sennett's binds. When she thanks him for doing so, requests that he take her to town, and return her the dagger, since it was her mother's memento, only for him to refuse, and state that it belonged to him now, greatly frightening her. He is, however, stopped and confronted by Jude, who declares that Ban will die, and when questioned by him for the reason, replies that it was because the Deadly Sin had fulfilled his role of being a bait for Meliodas. He also adds that after he kills him, and his knights, the two other Deadly Sins, there will be four less criminals in the world, reminding Ban as to who had captured and tortured him during his imprisonment.

Meanwhile, Diane and Meliodas' battle continues, with the former complementing the latter for being strong "for a midget Holy Knight", and him complementing her for being quick "for a giant Holy Knight", since each is deluded to believe the other is Ruin. As they battle, Elizabeth desperately yells for them to stop, which causes Diane to regain her senses and memories. The young shepherd, who had met Diane on her way to Baste, goes toward her, only for her to then be hypnotized again and continue fighting Meliodas. Seeing the civilians frightened, Elizabeth declares that she will put her life to protect them. Hearing that, Friesia, testing Elizabeth's declaration, uses her bugs to attack the young boy, and when she hesitates, taunts her. He, however, is surprised when Elizabeth willingly enters the tornado of bugs, being injured in the process, and protects the boy. The child, however, replying that while her risking injury to protect a child was admirable, reality is harsh, reveals himself to be a disguised Ruin under an illusion.

As Elizabeth asks him to undo the hypnosis, he pulls her with the hair and knees her in the chest, and hits her in the head with the top of his staff when she manages to get up. Telling Friesia that nothing was better than the face of a young girl writhing in pain, Ruin, in commendation for her bravery, explains to Elizabeth that the source of his illusions was his staff's bell, only to find it to have been removed by Elizabeth when she was hit with the top of the staff. He lashes out in anger, but before he can kill her, is stopped by Meliodas, who has regained his senses since the source of the hypnosis has been removed.

Retrieved from "https://nanatsu-no-taizai.fandom.com/wiki/Chapter_13?oldid=121929"
Community content is available under CC-BY-SA unless otherwise noted.