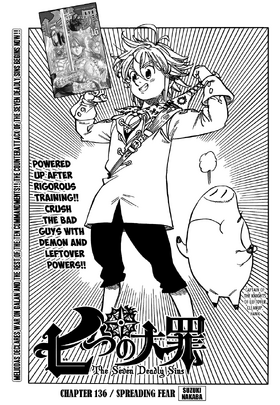 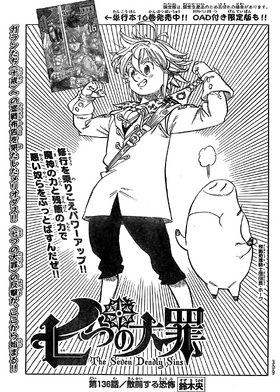 Spreading Fear「散開する恐怖 Sankai suru Kyōfu」 is the 136th chapter of the manga, Nanatsu no Taizai.

The Ten Commandments commence their full-scale invasion of Britannia.

Galand is furious over his defeat at Meliodas hands, and demands that Melascula finds him immediately, saying that if he's left to his own devices he will simply threaten the Demon Clan again. Melascula sarcastically asks if Galand wishes to be defeated again and while Galand protests, Zeldris agrees, stating as he is now he's no match for Meliodas.

Zeldris states their goal is complete dominion over Britannia and explains their new course of action: split of into groups of two or more in order to recover their magic as quickly as possible, and use any methods they deem necessary to wipe out the other races. Fraudrin asks if they are declaring war on Meliodas, and Zeldris states it won't be a war, but an extermination. Fraudrin warns that they should be cautious, as Meliodas is also has the Seven Deadly Sins. Monspeet asks who these people are as they've been mentioned before, but Galand interrupts, saying it doesn't matter. He is livid at the thought of Meliodas being stronger than him and argues that if he was fighting seriously Meliodas would be dead. Before he can finish his statement, however, he is interrupted by the Commandment with four arms. He tells him he can understand how Galand feels but that he shouldn't lie. After all, the curses of their own commandments will strike even them if they violate their laws. Galand grits his death in silence, and Zeldris declares it time to bring Britannia under the banner of the Demon King.

Most of the Ten Commandments fly off, but Estarossa and Zeldris remain behind. Zeldris asks why his brother has not left, and Estarossa says he simply wants to enjoy the fresh air a bit more after being sealed away for 3,000 years. As Zeldris also has something he wishes to do in the area, he does not question the matter further. A bird then lands on Estarossa's arm, and as he stares at it, it suddenly mutates into a grotesque monster and explodes. Estarossa seems irritated by the entire situation.

Moving to the town of Bellford, Derieri and Monspeet have began eating people's souls. The octopus demon and the four-armed giant have taken interest of the giant boulder crushing Vaizel. Meanwhile, Meliodas has returned to Istar.

Meliodas explains his message to the Ten Commandments, and Jenna and King scold him for provoking them. He explains that, yes, that was exactly what he did, because it will cause them to split up to faster conquer Britannia. He explains that if all ten of them are together, there is no beating them, but if they split up, they can hunt them down and defeat them one or two members at a time. Hawk hears this and is excited at the prospect, and Meliodas turns and asks him if his training is done, only to be stunned by his new appearance.

Brushing Hawk's strange new looks aside, he asks Zaneli if Elizabeth is also done with her training. Elizabeth comes to the area, wearing new clothes, which both Meliodas and Howzer take a liking to. Meliodas asks Elizabeth how her training with, only for her to reluctantly tell him it was a complete failure.

Retrieved from "https://nanatsu-no-taizai.fandom.com/wiki/Chapter_136?oldid=109812"
Community content is available under CC-BY-SA unless otherwise noted.