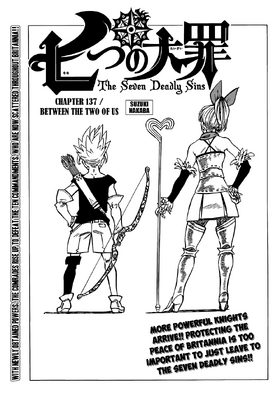 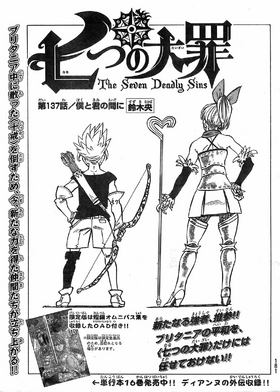 Boku to Kimi no Aida ni

Between You & Me「僕と君の間に Boku to Kimi no Aida ni」 is the 137th chapter of the manga, Nanatsu no Taizai.

Meliodas' group leave the Druid's sacred land. Fraudrin arrives at a town, not knowing a fight awaits him.

Meliodas' group prepares to head off, with Jenna and Zaneri seeing them out, and Theo taking an afternoon nap. Zaneri remains silent towards Meliodas, and is startled when it appears that Meliodas knows how she feels about him, however Meliodas is talking to Elizabeth, Elizabeth is depressed at being unable to complete her training but Meliodas cheers her up stating that people fail all the time and that failing once or twice was nothing compared to the thousands of times he failed to control his wrath. Helbram asks King about what happened in the cave, King simply states that nothing happened, Jenna talks to Hendrickson about his atonement, Howzer and Gilthunder say their thanks and the group exits through the stone archway.

After the group has left it is revealed that Elizabeth did not fail the test as the seed that Elizabeth was supposed to make grow was not put in Zaneri, reasoning that if something were to happen to Elizabeth, Meliodas would lose control again. Zaneri then confirms that Elizabeth is the reincarnation of Liz.

The group is outside on a hill, Meliodas states that Gilthunder and Howzer look a lot stronger, Hawk uses the Balor's Eye to see their power levels, Gilthunder went from 1970 to 2330 while Howzer went from 1910 to 2350, while the two celebrate, Meliodas questions Hawk on his new appearance, Hawk explains that he and Oslo were fighting a Tyrant Dragon which ate Hawk, in turn Hawk ate his way out of the dragon seemingly gaining some of it's traits in the process. Hawk exclaims that he has become stronger, proceeding to shoot fire out of his nostrils, scorching them in the process as well as flapping his ears to achieve flying, albeit only off the ground by a small margin. Meliodas looks over to see Slader holding an infant Griamore, and Gowther trying to remove a cat-like creature from Arthur's head asking them to fill him in on what happened along the way.

Gilthunder goes over to Hawk and asks about Meliodas' power level, Hawk says his power level is 3250, which Hawk questions how Meliodas has gotten weaker as Gilthunder and Howzer state they are egtting closer to catching up with Meliodas, Merlin corrects Hawk saying he forgot the zero on the end, Meliodas' total power level is now 32,500, Hawk asks if they even need to find Escanor with Meliodas being this powerful while Howzer and Gilthunder look on in shock. Meliodas states that Escanor is even stronger than him provoking mixed reactions from Howzer, Gilthunder, Hendrickson and Merlin. Meliodas does note, however, that this is partly because he's not fully acclimated to his old strength.

Meantime Fraudrin comes down from a mountainous region and starts walking towards a town, as he approaches the entrance to the town two people talk about him identifying him as a demon, recounting how they were sent to the borderlands by Dreyfus and Hendrickson, and Hendricksons defeat at the hands of the Seven Deadly Sins. The two mention the plan of Lord Denzel and announce themselves as members of the Pleiades of the Azure Sky. The two stands side by side, the girl holding a staff and the boy holding a bow, preparing for battle.

The Last Page of Chapter 137

Retrieved from "https://nanatsu-no-taizai.fandom.com/wiki/Chapter_137?oldid=149648"
Community content is available under CC-BY-SA unless otherwise noted.