A Fight with Darkness 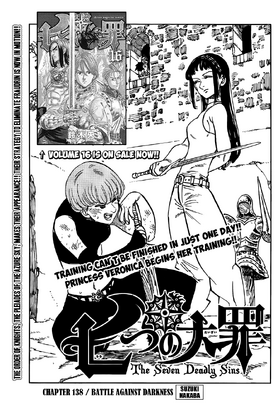 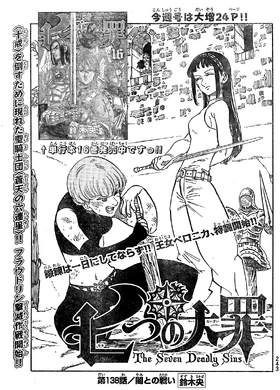 Yami to no Tatakai

A Fight with Darkness「闇との戦い Yami to no Tatakai」 is the 138th chapter of the manga, Nanatsu no Taizai.

Fraudrin faces off against some of the Pleiades of the Azure Sky.

Arriving in the town of Ferson, Fraudrin taunts Dreyfus trapped in his own mind with talk of happier days. Fraudrin laughs off Dreyfus' cries of how he can't hurt the innocent people of the town, telling him his hands are already stained with blood. Dreyfus tries to resist but it is no use, and Fraudrin reminds him that they've known each other longer than Dreyfus knew his wife. Noticing some girls nearby, Fraudrin sees it as a convenient time to quench his thirst with some souls. One of the girls takes notice of him, and flashes him a wink. Fraudrin thinks that the girl has taken a liking to Dreyfus and she asks him if he's from around there. He says that he's a traveler but she notes that he doesn't look like an ordinary traveler. He seems to noble, almost like a holy knight. He asks if they've meet before and she kisses him on the check asking if he's forgotten her, calling him one of the two Great Holy Knights.

The girl then reveals herself to be Deldry of the Pleiades of the Azure Sky, serving under Denzel. Upon hearing the name Fraudrin understands that Denzel is finally making his move, and Deldry says that it's too bad things had to be this way as he's her type but Fraudrin replies that there are worse things than having your soul eaten by a man to your liking. She asks if he really intends to kill her before finding out what Denzel is planning, but he assures her he'll have that information once he's eaten her soul and prepares to attack...only to punch himself in the face.

Fraudrin asks himself how he could almost harm his dear Deldry only to then question what he is saying. Deldry explains that it is her power, Love Drive:with put a simple gesture of affection she can induce made love and devotion to her from other people. Fraudrin laughs off her power as pathetic, and grabs her...only to scream he loves her. She contemplates strengthening the affect just to be safe, while Fraudrin tries to keep a hold of his mind. He tries to kill her before it's too late, but then suddenly they are attacked by someone from a far off building. He pushes her out of the way, but one grazes her. She berates him harshly, saying he hesitates and then kisses him to strengthen the effect. More arrows are fired, this time directly at Deldry, but Fraudrin blocks them all, question who would dare to attack his Deldry. Fraudrin attempt to destroy the entire town to cox the attacker out of hiding, but finds that he can't. The attacker then revels himself to be Arden, another member of the Pleiades.

Arden and Deldry have a little back and forth and then Fraudrin asks what he wants. Arden asks how many of his arrows has Fraudrin been hit with. He counts five, and then explains his power, Vain:weapons infused with his magic have a hampering effect which eats up more magic depending on how many you are hit with. With Fraudrin hit by five arrows, even his simplest attacks will take five times the normal amount of magic to use, and his strongest attacks won't even activate at all. Fraudrin scoffs at the idea that he'd even need magic to kill someone like Arden and quickly moves in to attack, but Arden is saved by someone pushing him out of the way.

It is Waillo, yet another member of the Pleiades. Deldry compliments him on the save and he asks her if she's thought about his marriage proposal. Fraudrin screams that he won't give Deldry to anyone else but before he can do anything Waillo knocks him into a building, rendering him unconscious. Having completed their mission the Pleiades teleport away before they can draw anymore unwanted attention to themselves. Meanwhile, Fraudrin's partner looks on at the scene.

Far away, Ban and Jericho hear word of a town were the dead are rumored to have returned to life. Seeking away to bring back Elaine, Ban tells Jericho they're heading there, while also lamenting it's the worst place in the world.

Retrieved from "https://nanatsu-no-taizai.fandom.com/wiki/Chapter_138?oldid=100345"
Community content is available under CC-BY-SA unless otherwise noted.