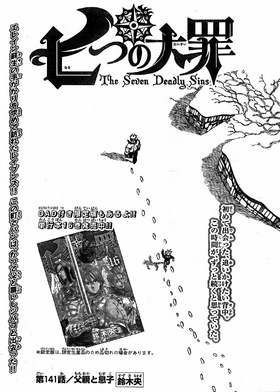 Father & Son「父親と息子 Chichioya to Musuko」 is the 141th chapter of the manga, Nanatsu no Taizai.

Reunion of father and son! Ban explains his life since the two parted ways, including his relationship with Elaine and his friendship with Meliodas. Struck with guilt, Ban feels he cannot face Meliodas, but Zhivago assures him that Meliodas is a great friend and that his problem can only be solved by asking forgiveness. After his final words, Zhivago dies. Meanwhile, Melascula brings forth countless souls from the afterlife, including Elaine's, who awakens in the Fairy King's Forest.

Revealing his true identity, Zhivago can hardly believe he has the opportunity to see Ban once more. Ban questions why Zhivago hid his nature as a Beast Man, while Jericho cries with joy for the father and son. Zhivago notices that Ban doesn't look as old as he should be, prompting Ban to explain his immortality and relation with the holy maiden of the Fairy King's Forest.

At the Fairy King's Forest, Gerheade feels an ominous presence while the forest's animals and fairies flee in terror.

After listening to Ban's story, Zhivago recounts recent rumors of the dead returning to life nearby, although he dismisses them as unhelpful. Realizing that Ban now has found something more precious to him than himself, Zhivago says that he's happy, as Ban had never opened himself up to anyone as a child. Ban then teases Jericho, but admits that he enjoys spending time with her.

As Ban's father, Zhivago notices that Ban is struggling with something more. Ban admits that he doesn't know what to say to Meliodas after trying to kill him. Despite what he did, Meliodas still forgave him, making him feel disgusted with himself. Zhivago reassures him that Meliodas is a great friend, and that he needs to ask forgiveness from Meliodas directly. Those were the final words of a father to his son, as Zhivago soon dies.

Meanwhile, as Melascula chants towards the sky, countless souls, fueled with regret, come down, floating around her. Galand eats one, much to Melascula's chagrin. One soul in particular flies towards the Fairy King's Forest, past Gerheade, and into corpse of Elaine, whose eyes then open.

Q131: Am-san (Oita Prefecture): Do you plan on bringing the ancient Fairy King into the main story?

The Last Page of Chapter 141

Retrieved from "https://nanatsu-no-taizai.fandom.com/wiki/Chapter_141?oldid=149653"
Community content is available under CC-BY-SA unless otherwise noted.