Where Love is Found 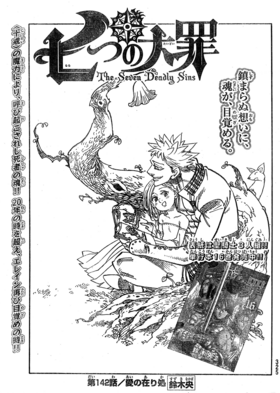 Where Love is Found「愛の在り処 Ai no Arika」 is the 142th chapter of the manga, Nanatsu no Taizai.

Elaine enveloped with rage, she attacks her fellow fairies and summons Oslo to teleport to Ban. King and Helbram, tipped off by Oslo's departure, realize that the gate between the living and the dead has been broken. King leaves to investigate, refusing the support of Meliodas. Meanwhile, Ban and Jericho finish burying Zhivago just as Elaine arrives. Ban takes an attack towards Jericho, but then, realizing who it is, kisses Elaine passionately.

Having been mysteriously revived, Elaine floats naked at the Fairy King's Forest. Shocked at the sudden development, Gerheade and all the fairies gather around her. Enveloped with rage and jealousy, Elaine uses Imperial Wrath of the Great Wind on the fairies, sending them flying.

Using her control of the wind, she creates a dress of leaves around her. She then calls Oslo telepathically, who's with King at the Boar Hat. Helbram tries to have King stop him, but fails. Consulting Helbram, King learns that the gate between worlds has opened, and that some of the dead are returning to life, albeit tainted by regret.

King informs the rest of the Boar Hat that he's leaving on his own mission. Meliodas offers his support, but King declines, refusing to trust him for concealing his identity. Elizabeth attempts to persuade King by acknowledging that no one knows her true identity, not even herself, but King departs regardless.

Near Ravens, Ban and Jericho construct a grave for Zhivago, Ban pouring Aberdeen Ale over it. Suddenly, a corpse rises from the ground, shocking Jericho. After it attacks Ban, he destroys its head.

Suddenly, Elaine appears behind Jericho. She attempts to attack her, but Ban pushes her out of the way, taking the blow. Realizing who it is, the two lovers kiss passionately.

Q132: Celt-Loving Red Cat-san (Oita Prefecture): I love how you draw armor! What book do you use as a source?

Nakaba: Sometimes I use illustrated reference books, but most of them are originals. (Laughs)

Retrieved from "https://nanatsu-no-taizai.fandom.com/wiki/Chapter_142?oldid=100343"
Community content is available under CC-BY-SA unless otherwise noted.