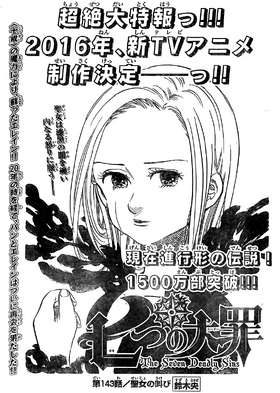 The Saint's Shriek「聖女の叫び Seijo no Sakebi」 is the 143th chapter of the manga, Nanatsu no Taizai.

Ban reunites with Elaine at last! However, their reunion is interrupted when Elaine, fueled by rage, lashes out against Jericho. Ban attempts to stop her, but she turns her rage against him instead. Jericho intervenes, questioning Elaine's love and admitting her own love for Ban. Elaine finally resists her rage, but begins to faint because of it. Noticing this resistance, Melascula and Galand appear, the two ready to fight against Ban.

As the dead of Ravens feast upon the living, Ban and Elaine share a loving kiss upon a hilltop. Jericho protests, Elaine having slit Ban's throat, but Ban shrugs her off. Elaine, filled with rage, launches Jericho away using her Power, ignoring Ban's request to stop.

Before Elaine attacks Jericho once more, Ban stops her. Elaine, confused as to why he defends the human, slices him with wind to escape. She continues her assault, stating that she's been watching all along from the Land of the Dead, and that her dream was to go with Ban on a journey. That he would do the same with Jericho fuels her rages.

Jericho intervenes, dodging Elaine's strikes and pinning her to the ground. Questioning Elaine's love for Ban, Jericho admits that she loves Ban as well. Elaine mocks her love, stating that Ban will never even look her, setting Jericho off. She says that she owes her life to Ban, and will do anything for him. However, she admits that, to Ban, Elaine means everything. He thinks of her every moment, and the sole purpose of his wandering was to revive her. Although she knows Elaine is being controlled, she feels that if Elaine's feelings were deep enough, she could resist it.

Elaine breaks free and launches one final blast of wind against Jericho, but Ban stops her with a hug. Elaine apologizes, but soon begins to faint, causing Ban distress.

Suddenly, two demons appear, one of them explaining that her technique, Vengeful Soul Revival, brings back the dead by amplifying their regrets. Once that regret disappears, they will return to death. Ban gives Elaine to Jericho as he prepares to fight. The two demons introduce themselves: Galand, The Truth, and Melascula, The Faith.

Q133: Missaaxel-san (Yamaguchi Prefecture): Helbram use his Link Death Ability, but isn't the number of types of Powers limited?

Nakaba: Because of Link, Helbram can use a vast variety of Powers.

Retrieved from "https://nanatsu-no-taizai.fandom.com/wiki/Chapter_143?oldid=104996"
Community content is available under CC-BY-SA unless otherwise noted.