That Man Walks the Way of Greed 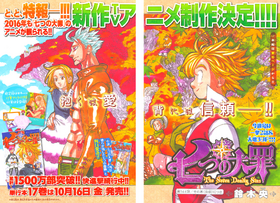 That Man Walks the Way of Greed「その男〈強欲〉につき Sono Otoko <Gōyoku> ni Tsuki」 is the 144th chapter of the manga, Nanatsu no Taizai.

Ban faces the Ten Commandments! Galand attempts to finish the fight before it begins, but he and Melascula are shocked when, despite their best efforts, Ban refuses to die. Impressed by his unique nature, Galand give Ban the opportunity to use Power, which enables Ban to steal their strength. Now with superior strength, Ban unleashes a barrage of strikes against them, forcing them to take him seriously.

Ban, furious at Galand and Melascula for having made Elaine suffer, snatches his nunchaku and prepares to fight. Before he can move, Galand swiftly performs Critical Strike, slicing Ban, as well as the landscape, in two. Galand complains that the victory is not enough to soothe the anger caused by Meliodas injuring him.

Ban, unscathed from the attack, introduces himself as Undead Ban. Having heard the demons describe Meliodas as a "traitor", he realizes he owes him an apology.

Both Melascula and Galand attack Ban fatally numerous times, but each fails to kill him. Having never seen such regenerative ability, they conclude that it must not be a component of his Power, but rather a unique trait of his body. Impressed and curious, Galand offers Ban one free hit before he continuing the fight, much to Melascula's chagrin.

Now given the opportunity, Ban uses Hunter Fest, draining the strength of all those around him, including the two demons. With the stolen strength, Ban strikes both of them, sending them flying. Ban continues his barrage against Galand, who is unable to retaliate. Confused, Galand consults Melascula, who postulates that Ban has stolen their strength and that he is now stronger than Galand. Ban, now with the upper hand, taunts the two cheerfully.

The Last Page of Chapter 144

Retrieved from "https://nanatsu-no-taizai.fandom.com/wiki/Chapter_144?oldid=149656"
Community content is available under CC-BY-SA unless otherwise noted.