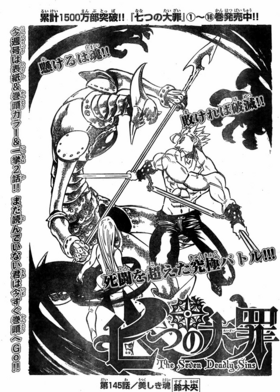 Beautiful Soul「美しき魂 Utsukushiki Tamashii」 is the 145th chapter of the manga, Nanatsu no Taizai.

Ban vs. Galand and Melascula! After attempting to take her down, Ban is trapped in a Cocoon of Darkenss by Melascula. Knowing she cannot kill an immortal, she instead removes his soul. As it flies away, Ban recounts happy memories with those most important to him. But before it can escape, Galand jumps in and eats it whole.

Melascula watches on as Ban combats Galand using the strength stolen by Hunter Fest. She questions why Ban doesn't wait until all of Galand's strength is stolen, and postulates that he is limited in the amount he can steal, as well as for how long.

Ban switches his offense to Melascula, who traps him in a Cocoon of Darkness. She explains that she is the Commandment of "Faith", and that those that show faithlessness before her will have their eyes set ablaze. She is impressed that even when Elaine showed unexplainable rage towards him, his faith never faltered.

Realizing she cannot kill an immortal, Melascula removes Ban's soul from his body, releasing the Cocoon of Darkness. As Ban's soul flies away, he recounts happy memories with Meliodas, Elaine, King, Hawk, Zhivago, and Jericho. At the Boar Hat, a bottle of alcohol falls, while Meliodas thinks of Ban.

Galand requests that Ban's soul be his, but Melascula refuses. Ignoring the refusal, Galand jumps, grabs the soul, and eats it, calling it delicious.

Q134: Zion-san: So Veronica didn't die at Vaizel like everyone thought she did. Until she came back into the story, what was she doing?

Nakaba: She spent her time with Griamore in a little shack next to Lake Pernes. What they were doing all that time, no on knows...

Retrieved from "https://nanatsu-no-taizai.fandom.com/wiki/Chapter_145?oldid=104998"
Community content is available under CC-BY-SA unless otherwise noted.