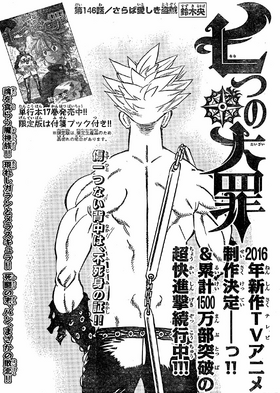 Farewell, Beloved Thief「さらば愛しき盗賊 Saraba Itoshiki Tōzoku」 is the 146th chapter of the manga, Nanatsu no Taizai.

Galand greedily consumes Ban's soul! As the two demons argue, Jericho begins to take a stand against them. Suddenly, Ban flees carrying Elaine and Jericho, simultaneously destroying a heart of each Commandment. Ban reveals that he was saved by Zhivago, whose soul acted as a decoy while Ban's escaped. Now unable to move, Ban and Elaine urge Jericho to escape alone. Refusing, she promises to carry the two to safety.

As Galand consumes Ban's soul, Elaine cries out in despair. Melascula, believing the soul to be for her consumption, scolds Galand for his actions. Jericho, having little knowledge of spirits, refuses to believe Elaine's explanation of the situation. As the two demons argue, Jericho raises her sword against them.

Suddenly, Ban moves and speaks, quickly using Fox Hunt to rip out and destroy a heart of each Commandment. Snatching Jericho and Elaine, Ban quickly retreats while the demons are temporarily injured. Galand, furious that Ban is still alive, uses Wretched Scatter Strike on the city below, still weakened by Ban's Hunter Fest. However, as it wears off, Ban, now in a nearby forest, collapses.

Ban recounts how he was saved: As Galand jumped to consume his soul, Zhivago's soul appeared, offering to act as a decoy while Ban returned to his body. For Zhivago, this would be his atonement for abandoning Ban all those years ago. Ban initially refuses, citing Zhivago's inability to be with Selion, but eventually agrees, recognizing Zhivago's bravery.

Unable to move as a side effect of Hunter Fest, Ban can no longer move at all. Both he and Elaine urge Jericho to escape alone, but she refuses, instead promising to carry them both to safety.

The Last Page of Chapter 146

Retrieved from "https://nanatsu-no-taizai.fandom.com/wiki/Chapter_146?oldid=149658"
Community content is available under CC-BY-SA unless otherwise noted.