The Chase of Death 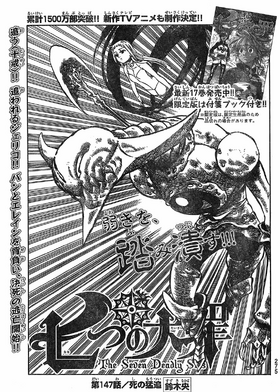 The Chase of Death「死の猛追 Shi no Mōtsui」 is the 147th chapter of the manga, Nanatsu no Taizai.

Escape the Commandments! As Galand and Melascula regain their strength, Jericho continues her escape with Ban and Elaine. Galand has fun attempting to crush his prey using meteor-sized boulders from afar, but ultimately fails, launching them into a mysterious cave. Inside is a small bar, and with it, a lone bartender.

Their strength returned, Galand and Melascula decide to toy with their prey. In a nearby forest, Jericho attempts to carry Ban and Elaine to safety, swearing to protect them. After falling, Elaine apologizes to Jericho for things she said during their fight.

From the sky, a giant boulder crashes into the ground, almost hitting them. The boulder, created by Melascula, was launched by Galand, like a golf ball.

Galand shoots another boulder, this time with a spin, forcing Jericho to let go of Ban and Elaine as it comes towards them. Jericho manages to break apart the boulder using her sword, leaving her injured in the process. Even still, she swears to continue carrying Ban and Elaine to safety, despite their protests.

Having failed to kill his prey, Galand shoots another boulder, this time barely missing, launching Jericho and the others off a cliff. Elaine uses Imperial Wrath of Zephyr to help them land safely near a dark cave. Inside the cave is an open bar with a lone bartender inside. As they enter, the bartender greets them to his store: "My Sweet Gluttony".

Q136: PN. Shimasaki-san: Which of the women has the biggest breasts?

Nakaba: If we're talking purely about size, then probably Diane or Matrona.

The Last Page of Chapter 147

Retrieved from "https://nanatsu-no-taizai.fandom.com/wiki/Chapter_147?oldid=149659"
Community content is available under CC-BY-SA unless otherwise noted.