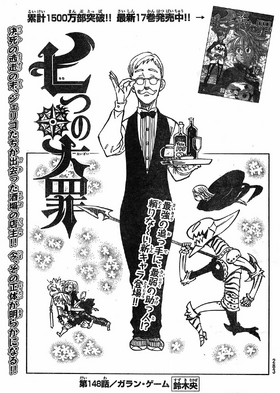 Galand's Game「ガラン・ゲーム Garan Gēmu」 is the 148th chapter of the manga, Nanatsu no Taizai.

Jericho flees into the mysterious bar! However, Galand and Melascula are not far behind. Luckily for her, they decide to drink away the night, indulging on delicious modern ale. Galand forces the bartender in to the deadly Galand Game, but only once morning comes does the bartender reveal his true identity: none other than the Lion's Sin of Pride, Escanor.

In an attempt to flee Galand and Melascula, Jericho (carrying Ban and Elaine) enters "My Sweet Gluttony", a bar tucked away in a cave. She's greeted by the bartender, who quickly recognizes Ban. Thinking that the Holy Knight is after him, the bartender backs away, before Jericho informs him that the Seven Deadly Sins are no longer considered criminals.

Relieved, the bartender questions Ban regarding Merlin. However, the conversation is cut short as Galand and Melascula arrive, with Jericho, Ban, and Elaine hiding in the storage vault.

Although still in pursuit of Ban and Elaine, the two demons take the opportunity to drink, noting the superb quality of modern alcohol, especially Bernia Ale. In their drunkenness, they explain their plan to destroy Britannia to the bartender, and inform him that they know he's hiding their prey.

Instead of outright killing the bartender and the others, Galand decides to play the Galand Game with him, a contest involving the exchange of physical attacks until one of the participants is dead. Galand decrees that the bartender will go first, to which he reluctantly agrees.

Galand accidentally knocks the bartender out before the game begins. As the night turns to day, the demons continue their drinking while the bar begins to heat up. Galand notices an axe on the wall, but has difficulty wielding it. Suddenly, the bartender rises, much more muscular than before, picking the axe up. Galand questions his humanity due to his shape-shifting nature, but the bartender ensures him that he is very much human. Claiming himself as the pinnacle of all species, he reveals his true identity: Lion's Sin of Pride, Escanor.

Nakaba: I may write a story for that at some point.

Retrieved from "https://nanatsu-no-taizai.fandom.com/wiki/Chapter_148?oldid=105001"
Community content is available under CC-BY-SA unless otherwise noted.