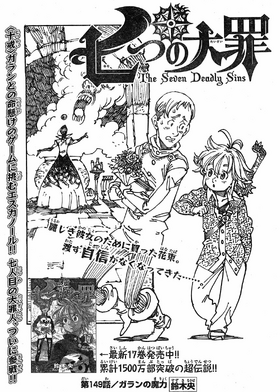 Galand's Magic「ガランの魔力 Garan no Maryoku」 is the 149th chapter of the manga, Nanatsu no Taizai.

The Galand Game commences! After surviving a swift initial strike from Escanor, Galand uses his Power, Critical Over, to boost his strength to its limits. However, even that proves futile against the blessed human. As Escanor initiates his finishing blow, Galand flees in fear, turning himself to stone and ending the Galand Game.

Revealing himself as the Lion's Sin of Pride, Escanor stands quietly as Galand and Melascula mock him for his arrogance as a human. For a moment, Escanor plays along, before using Rhitta to slice Galand in two. Melascula is initially shocked by this display of power, but Galand quickly regenerates.

His instincts telling him that Escanor must be defeated immediately, Galand uses his Power, Critical Over, boosting his physical strength to its limits. With this new strength, he attempts to slay Escanor to no avail, causing an enormous shockwave in the process.

Galand refuses to back down from the human, despite Melascula's protests. However, as Escanor charges up for one final strike, Galand fears for his life and flees, turning himself to stone. Escanor laments being unable to attack and declares the Galand Game complete, while Melascula looks upon Galand's petrified body with disappointment.

Q138: Koizumi Souri-san (Tokyo Metropolitan District): When Elaine was revived in Chapter 142, she made a dress for herself with flower petals, but is she wearing underwear? Since she's a fairy, can we assume she isn't wearing any?!

Nakaba: She is not.

Retrieved from "https://nanatsu-no-taizai.fandom.com/wiki/Chapter_149?oldid=105003"
Community content is available under CC-BY-SA unless otherwise noted.