Caught In the Reunion 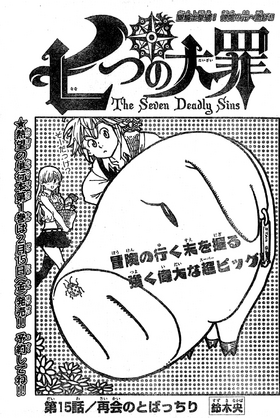 Caught In the Reunion「再会のとばっちり Saikai no Tobacchiri」 is 15th chapter of manga, Nanatsu no Taizai.

Whilst Meliodas finishes his battle with Ruin, Diane also defeats Friesia. Placing the heavily injured Elizabeth into her backpack, Diane enters the Baste Dungeon together with Meliodas and Hawk. As they do so, Golgius activates a spell called the Eternal Seal Spell, aiming to trap the Deadly Sins inside forever. Inside, the characters find a frightened Sennett fleeing from Ban who had just killed Jude, with Ban and Meliodas then destroying the entire dungeon during their highly competitive reunion and arm wrestling.

Diane is shown to have easily defeated Friesia, and utterly crushed him into the ground, as Hawk apologizes to the heavily injured Elizabeth for not being able to protect her due to his powerlessness. Diane removes her giant backpack, intending to place Elizabeth inside it and take her to the town for treatment; Elizabeth, however, requests to be taken inside Baste. The second, and older shepherd of the two is revealed to be a soldier from the dungeon, who was ordered by the Holy Knights to act as a shepherd along with the disguised Ruin. Though he refuses to reveal Ban and Sennett's location inside since he would be punished by the Holy Knights, he then reveals them when threatened by Diane holding Friesia's defeated body. As Diane, Meliodas, Hawk and Elizabeth, who is sleeping inside the bag, enter the dungeon, where they find no soldiers. Outside, Jericho asks Golgius for his orders, and he, saying that he is impressed by the Deadly Sins' power, uses an Incantation Orb to activate a trapping spell called the Eternal Seal Spell, a spell which, he adds, even ten Tyrant Dragons couldn't break, and that the only way for the Deadly Sins and Elizabeth was to die without being able to come back.

Inside, the group encounters a Sennett, who is fleeing from Ban after being frightened by him killing Jude, with him appearing soon behind her. Initially appearing very tense despite having just reunited after 10 years, they are shown to get along very well, and high-five multiple times at great speed, with one mere tap by Ban sending Meliodas flying while destroying the walls, with the latter then hitting the former with a headbutt, sending him flying in the same way, as a response. They then energetically start arm wrestling, their mere force immediately starting to destroy the entire Baste Dungeon, much to Sennett and Hawk's surprise. Ban questions his captain about their score, which was 361 wins out of 720; each claims to be the one with the higher score, as the dungeon collapses. As Golgius and Jericho leave to report the Deadly Sins' confirmed death inside, they are greatly surprised when the spell proves to be of no use. After its destruction, Ban tells Meliodas that he is happy to meet them again in the rubble.

Retrieved from "https://nanatsu-no-taizai.fandom.com/wiki/Chapter_15?oldid=121974"
Community content is available under CC-BY-SA unless otherwise noted.