Master of the Sun 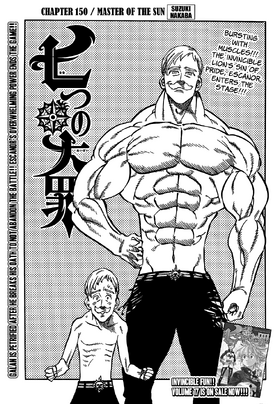 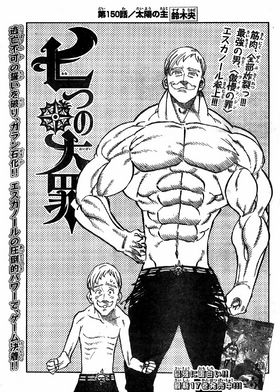 Master of the Sun「太陽の主 Taiyō no Aruji」 is the 150th chapter of the manga, Nanatsu no Taizai.

Attempting to consume Escanor's soul, Melascula is ignited from within, resulting in her defeat and an end to the battle. Escanor reintroduces himself to Ban, Elaine, and Jericho before King arrives to see his sister alive once more. Meanwhile, Matrona offers to teach Diane to be a dancer after performing the ritual Drole's Dance.

Having forced Galand to turn himself into stone, Escanor turns his attention to Melascula, offering her the choice to flee. Melascula refuses, trapping him inside a Antan no Mayu. She attempts to remove and feast upon his soul, but is instead burned by it from within. Caught in the blaze, she falls into a dark ravine, splitting in two after hitting its wall.

Knowing noon will soon be upon them, Escanor retreats until night. In frustration for the consumption of Zhivago's soul, Jericho kicks Galand's stone body. Elaine is relieved that she can be with Ban once again, and thanks Jericho for encouraging them.

Once night falls, Escanor, now weak, reintroduces himself and explains his power, Sunshine. Although he is interested in rejoining the Sins, he exclaims that must first make his final liquor delivery. Suddenly, King and Oslo appear, the former in shock seeing his sister alive once more.

Meanwhile, Diane watches Matrona as she performs Drole's Dance, a ritual dance of the Giant Clan. Diane laments that she is suited for fighting rather than dancing. In response, Matrona tells Diane that she will train her to become a dancer from then on.

Q139: Awakening, featuring Lord Ban-san: How many times has Ban been imprisoned?

Nakaba: So many times that he doesn't remember himself. Mainly when he was a kid.

Retrieved from "https://nanatsu-no-taizai.fandom.com/wiki/Chapter_150?oldid=105004"
Community content is available under CC-BY-SA unless otherwise noted.