The Stage Awaits Us 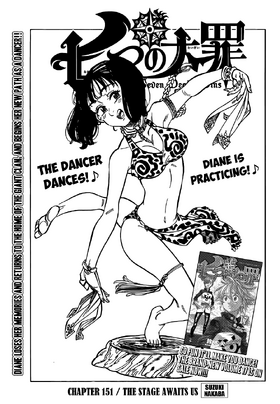 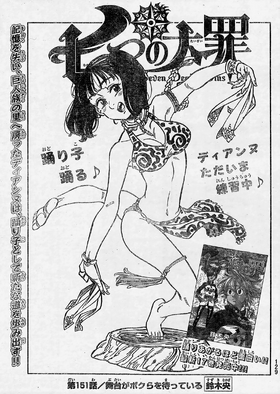 The Stage Awaits Us「舞台がボクらを待っている Butai ga Bokura wo Matte Iru」 is the 151st chapter of the manga, Nanatsu no Taizai.

Diane attempts Drole's Dance! Matrona explains her survival to Diane, as well as the importance and power behind the sacred dance. Diane begins to question her missing memories, when a Blue Demon suddenly appears, informing her of the upcoming Vaizel Fight Festival. Meliodas and the others also receive the message and decide to participate, despite its suspicious nature. At Vaizel, two of the Ten Commandments lay wait for the arrival of Meliodas.

After failing to successfully perform Drole's Dance, Diane expresses her surprise regarding both Matrona's survival and children. Matrona explains that Zalpa, a man from the savage tribes that Diane had once spared, saved her life after being fatally poisoned, and has since lived with him and his children, treating them like her own.

Matrona questions Diane's amnesia, noting its similarities to her previous case of amnesia after disappearing for 500 years. She then questions the appearance of the Ten Commandments that attacked Diane, noting their immense strength. Noticing Diane's fear, she drops the conversation, returning to the dance.

Matrona describes Drole's Dance as majestic, beautiful, and sacred. In performing it, the dancer becomes attuned to and comes together with the earth and nature itself. Diane begins to practice once more, but soon notices her lack of memory regarding her glove, clothes, tattoo, and hammer.

From the sky appears a Blue Demon, carrying a flyer regarding the Vaizel Fight Festival being held in a few days, promising a granted wish to the victor. Similar flyers are distributed across Britannia, including to the Boar Hat. Meliodas and the Holy Knights recognize it as a trap, but decide to go regardless.

At Vaizel, two of the Ten Commandments greet the return of the Blue Demons who distributed the flyers, noting one as missing. The two discuss the festival as their plan to lure both humans, to consume their souls, and Meliodas, who one of them has a particular history with.

Q140: Sugata-san (Kyoto Prefecture): Why does Slader wear a mask? Why does he change his way of talking when he wears the mask?

Nakaba: The mask is like a switch for him to turn his job mode on and off.

Retrieved from "https://nanatsu-no-taizai.fandom.com/wiki/Chapter_151?oldid=105005"
Community content is available under CC-BY-SA unless otherwise noted.