Attracted by the Candle's Light 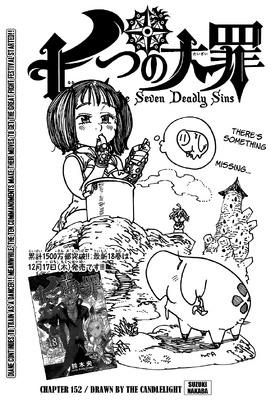 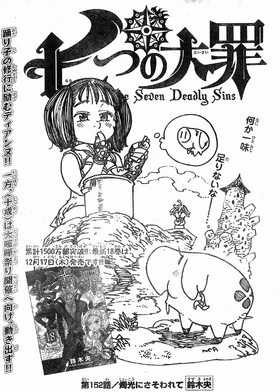 Attracted by the Candle's Light「燭光にさそわれて Shokkō ni Sasowarete」 is the 152nd chapter of the manga, Nanatsu no Taizai.

Diane becomes one with the earth! As she continues to dance with nature, she begins to feel a new connection with it. Suddenly, a Blue Demon injures Matrona's children, to which she retaliates, killing it. Unable to treat their wounds, Matrona and Diane depart for Vaizel for a potential cure. At Vaizel, one of the Commandments is revealed to be Drole, the ancestor of the Giant Clan.

The next day, Matrona spends time with her family, Sol hunting birds while Della sits between her breasts. The two children decide to go fish by the river alone, Zalpa letting them go without his or Matrona's supervision.

Nearby, Diane dances majestically among the wildlife, experiencing its excitement and joy. Despite her eyes being closed, she can feel the nature around her as if she's touching it, becoming one with the land. For an instant, she feels as she's being swallowed by a wave of earth, but Matrona calms her, stating that there was no such wave.

By the river, a Blue Demon appears, injuring Sol and Della. Matrona, furious, crushes the demon in a sphere of stone as it tries to escape. Zalpa attempts to mend the wounds of his children, but states that they may not live for long. Matrona, intent on using the promised wish of the Vaizel Fight Festival to heal the children, heads out, despite Zalpa's protests. Diane follows with Gideon as Matrona prays to Drole for strength.

At Vaizel, the two Commandments are waiting for strong fighters to arrive. One of them mentions that he can feel that Galand and Melascula have been defeated and that Fraudrin's presence has disappeared as well. The other compliments him, using the name Balor, which he rejects. She corrects herself, calling him Drole.

Q141: Ottie-san (Tokyo Metropolitan District): We already know what King and Elaine smell like, but what about the other fairies? What do they smell like?

The Last Page of Chapter 152

Retrieved from "https://nanatsu-no-taizai.fandom.com/wiki/Chapter_152?oldid=149665"
Community content is available under CC-BY-SA unless otherwise noted.