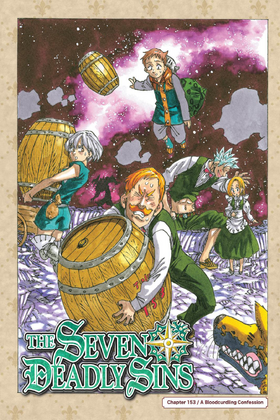 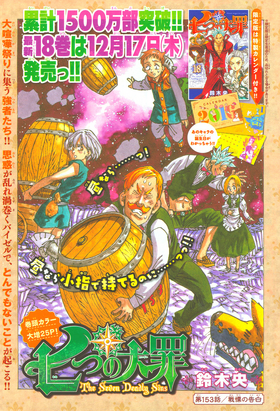 A Bloodcurdling Confession「戦慄の告白 Senritsu no Kokuhaku」 is the 153rd chapter of the manga, Nanatsu no Taizai.

Fraudrin's interrogation! Captured by the Pleiades of the Azure Sky, Fraudrin is forced to fight Denzel, its captain. Using Judgement, Denzel summons the spirits of those Fraudrin once killed to haunt him. As Fraudrin retaliates, Deathpierce joins the battle, using his power to interrupt his attacks. With escape impossible, Fraudrin reveals that it is Gowther, not himself, that is the true member of the Ten Commandments

In a desolate tower near the border town of Zeldon, Fraudrin finds himself a prisoner of the Pleiades of the Azure Sky. His interrogator, Denzel Liones, brother of Bartra Liones and captain of the Pleiades, recognizes at once that he is not Dreyfus. Having been assigned here by Fraudrin, Denzel spent the last several years deciphering ancient texts with knowledge of how to fight the demons should they be resurrected.

Fraudrin refuses to talk, but Denzel, using a blessed druid sword inflicts severe injuries on the demon, forcing him to break the chains that shackled him and take up the sword. Denzel reaffirms that his goal is to protect humanity and prove its strength, even against the legendary demons.

Outside, Arden, Deldry, and Waillo lie in wait for a signal from Denzel. Arden almost drops an Incantation Orb, much to Deldry's fury, but Waillo manages to catch it before it breaks. While Deldry dreams of a beautiful lover, Arden mentions talk of the Grand Fight Festival in Vaizel.

Back inside, Denzel and Fraudrin clash swords. Denzel, using his ability "Dead Man Revenge", summons the spirits of those that Fraudrin killed during the Kingdom Infiltration, including Weinheidt, Hugo, and Jillian. Fraudrin tries to retaliate with an attack of his own, but it is delayed by Deathpierce's Melody, which lets him control the rhythm and speed of magic.

Realizing the futility of the battle, Fraudrin attempts to escape, but it blocked by a Perfect Cube that surrounds the room. Fraudrin, unable to escape, reveals that he is not a true member of the Ten Commandments, but merely a "substitute", and that Gowther was unknowingly the true Commandment of Selflessness, his personality and memories by sealed by his Commandment. Back at the Boar Hat, Gowther excitedly quotes one of his books as the group heads towards Vaizel.

Retrieved from "https://nanatsu-no-taizai.fandom.com/wiki/Chapter_153?oldid=105007"
Community content is available under CC-BY-SA unless otherwise noted.