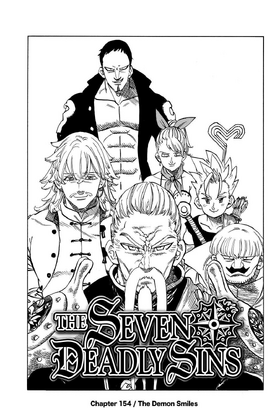 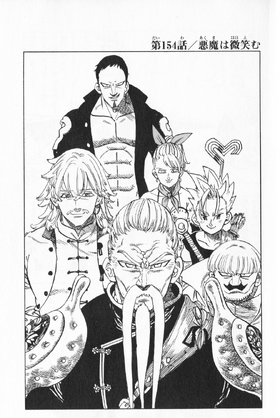 The Demon Smiles「悪魔は微笑む Akuma wa Hohoemu」 is the 154th chapter of the manga, Nanatsu no Taizai.

Denzel and Deathpierce vs. Fraudrin! As the two Pleiades recover from the shock of Fraudrin's revelation, the Perfect Cube surrounding them begins to break. Dogedo enters the tower, but he soon transforms into Grayroad, one of the other Commandments. Denzel allows them to leave, knowing he'll be unable to kill them without repercussions. Fraudrin does so, but not before stabbing Deldry and destroying both the tower and the Pleiades with Dreyfus' Break.

Outside the Pleiades' tower, Dogedo appears, having finished his report to the King. Telling the others that they're free to go to Vaizel, he takes the Incantation Orb they're holding.

Inside, Denzel and Deathpierce react in shock to the revelation that Gowther is a member of the Ten Commandments. Fraudrin states that should he die, the commandment will pass back to Gowther. Suddenly, the Perfect Cube begins to collapse, Dogedo opening the door, despite Deathpierce not having sent the signal to do so. Dogedo transforms, revealing him to be an impostor. In reality, it was Grayroad, the Pacifist of the Ten Commandments. On the road to Vaizel, Arden, Deldry, and Waillo run into the actual Dogedo, much to their surprise.

Denzel decides to let the pair of demons go, explaining to Death Pierce that they will most likely suffer from Grayroad's commandment should they slay them. As Fraudrin exits the tower, he runs into the rest of the Pleiades, ready to fight. Deldry tries to use Love Drive on him, but the effects have be cancelled due to the Incantation Orb. Instead, Fraudrin stabs her through the stomach.

Fraudrin begins to walk away, but realizes that killing them now would be more logical. Destroying the tower, and the Pleiades along with it, with Dreyfus' Power, Fraudrin and Grayroad fly away.

Retrieved from "https://nanatsu-no-taizai.fandom.com/wiki/Chapter_154?oldid=105008"
Community content is available under CC-BY-SA unless otherwise noted.