The Poem of Beginnings 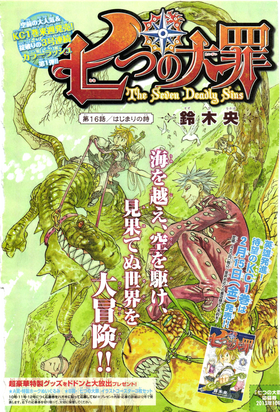 The Poem of Beginnings「はじまりの詩 Hajimari no Uta」 is the 16th chapter of the manga, Nanatsu no Taizai.

The Baste Dungeon destroyed, the characters head back to Dalmary, where they discover Dana to still be mysteriously alive. At night, they have a party, where Ban is officially introduced to Elizabeth and becomes greatly excited when he discovers Hawk's ability to talk. During the party, Diane and Elizabeth develop a closer relationship, and everyone then sleeping after it.

The shocked Dalmary townspeople notice Baste to have collapsed, and the people who were imprisoned for opposing the Holy Knights, and also Sennett, to be coming back, as Meliodas, Ban, Diane, Hawk and Elizabeth, who is inside Diane's bag, also return. Outside of Dana's house, Diane and Meliodas question Elizabeth as to how she is feeling, to which she instead questions them about Ban, Sennett and Hawk, with the Hawk retorting to her to worry about herself first, and Meliodas informing her that Sennett was told everything about her father's death. The princess then requests that Meliodas go with Sennett, as Ban wanders away on his own, and Meliodas enters the house, only to find Dana to be mysteriously alive, much to their surprise. The doctor reveals that he knew nothing about this phenomenon, his young assistant explaining that the townspeople had found him and carried him here, and that she thought he was definitely dead due to being stabbed through the chest. The doctor, showing the deep wound to have neatly and completely healed and to have left a huge scar, and points out that it was similar to Meliodas' sword wound, which had also healed and left a scar in a similar way.

Sennett then cuts him, questioning the reason why he was nearly killed and she, imprisoned, with him answering that he was threatened by the Holy Knights and using her as a hostage, forced to poison Meliodas. Immediately, telling him that doing so was not his fault, but the Seven Deadly Sins' own fault, Sennett also states that everyone in the kingdom knew that they were criminals. Dana, however, argues in their favor, explaining that even though he had tried to kill Meliodas, the young man had never blamed him and had even rescued her, and then offers a token of his gratitude by a meal.

At night, during the party, Ban is formally introduced to Elizabeth, who is still bed-ridden, and upon discovering Hawk to have the ability of talking, becomes greatly excited, having thought of the pig to merely be for Diane's food; the Sin of Envy has to stand while eating due to her size. As the party continues, Elizabeth wishes that the moment could last forever, stating that the events in Baste reminded her all the more about the Holy Knights' frightening abilities, and the fact that only the Seven Deadly Sins could match them. In response, Diane replies that while she doesn't know, and isn't interested in, humans and human kingdoms, she wouldn't mind fighting for the princess, since she was "really cool" that day, and did have powers: the power to move her and Meliodas' hearts. She also asks her whether she could henceforth address her as merely "Elizabeth", instead of "princess", and then tells the young lady to address her as just "Diane".

Seeing the group partying, Dana questions the Deadly Sins being labelled criminals, calling it an absurd lie, and also thinks that he feels the presence of an immeasurably great will. Just then, Sennett notices crossing shooting starts in the sky and brings them to everyone's attention, with Dana recognizing it to be similar to one of Britannia's ancient poems, which states that when such an event occurs, Britannia will be visited by an "immense menace", the event being an omen of the beginning of a trial of ancient origins, a "Holy War" between the "Guiding Hand of Light" and the "Bloodline of Darkness".

Retrieved from "https://nanatsu-no-taizai.fandom.com/wiki/Chapter_16?oldid=122005"
Community content is available under CC-BY-SA unless otherwise noted.