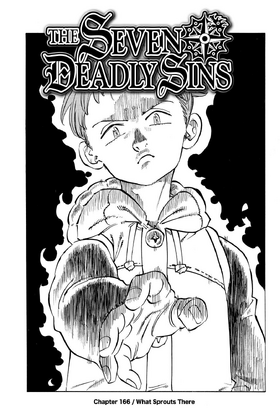 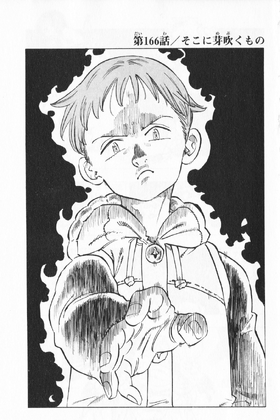 What Sprouts There「そこに芽吹くもの Soko ni Mebuku Mono」 is the 166th chapter of the manga, Nanatsu no Taizai.

King attacks and defeats the Drole Golem with ease, due to him releasing the true power of the Spiritual Spear Chastiefol in its Guardian Form. However, Gloxinia notices that the fairy king needs a lot of power to use it. So the Gloxinia Servant attacks Diane with vines but is easily destroyed by the spear's fifth form. King attacks the Gloxinia Servant using his first form, easily defeating it. But as they commemorate their victory, it turns out Drole's Golem is still alive and attacks King quickly. Before attacking again, Diane protects him. King asks why she did this, and Diane says that it's because she can't just watch him die after opening his heart for her.

Q154 PN. Meliaya * X (From Hiroshima): What kind of body odor does Meliodas have?

Nakaba: He's still quite a young man so however he smells. I wouldn't exactly call it body "odor".

Retrieved from "https://nanatsu-no-taizai.fandom.com/wiki/Chapter_166?oldid=105020"
Community content is available under CC-BY-SA unless otherwise noted.