The Special Thing Inside You 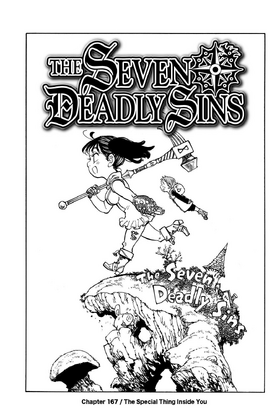 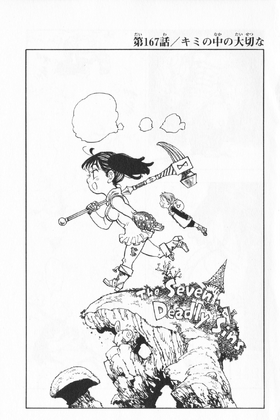 Kimi no Naka no Taisetsu na

The Special Thing Inside You「キミの中の大切な Kimi no Naka no Taisetsu na」 is the 167th chapter of the manga, Nanatsu no Taizai.

As Diane gets up from the Drole's Golem attack, she asks King what she represents to him, but only wants to hear it after defeating the giant's servant. Diane then summons two of her own rocky giants to confront Drole's, but they are quickly destroyed. Diane is confused, but King explains that she needs something to believe on to defeat him. Diane takes his advice and creates servants in the image of Meliodas, Elizabeth, and Matrona. King is jealous that she didn't make him but notices that she actually created a small version of him. The Golems attack the servant, but each one is easily defeated by it. The King Golem attacks it and surprisingly defeats Drole's with one punch. Taizoo declares victory for the couple, as Diane explains that she thinks King is a very strong person.

Q155. PN Mirari-san (Ooita Prefecture): The clothes that Zhivago are wearing in his flashback are the same ones that Ban is wearing, aren't they?

Nakaba: Yup. Ban picked up those cloths after they had been dropped on the roadside.

Retrieved from "https://nanatsu-no-taizai.fandom.com/wiki/Chapter_167?oldid=105021"
Community content is available under CC-BY-SA unless otherwise noted.